Matt Chittock discovers how the natural products industry can help wean consumers off their sugar crush and beat a global problem.

It’s official: diabetes is now a global epidemic. According to a study earlier this year from the University of East Anglia one in twelve adults across the world now suffer from the condition. And the situation’s set to get worse, with the number of sufferers predicted to rise by a massive 55% in the next twenty years.

To put this in perspective, in 2013 scientists estimated that 382 million people had diabetes. If nothing changes, this figure could soar to 592 million by 2035.

Of course, not all strains of diabetes are the same. Scientists estimate that around 10% of the people that make up this figure have type 1 diabetes: an auto-immune disorder that they experience from childhood onwards. Yet the scientists behind the study are clear on what’s causing the cases of type 2 diabetes that make up the rest – sedentary lifestyle and a poor diet.

Marilyn Glenville (www.marilynglenville.com) says that in her clinic she sees two kinds of people come in for help with diabetes.

“Basically, one group are made up of those that have a family history of diabetes, so they know they’re at risk and want help with prevention,” says Glenville.
“The other group is people who have been diagnosed with pre-diabetes and have received a real wake-up call that they have to change their lifestyle. It can be a real shock to the system, but you can often see that they really do want to change.”

Glenville cites ‘pre-diabetes’ as a diagnosis that is helping lead the fight-back against the full-blown condition. A diagnosis of pre-diabetes means that a person’s blood sugar level is higher than normal, but not high enough to be classified as type 2 diabetes. As she suggests, it can be useful for giving people the spur to turn their lives around.

“At the pre-diabetes stage the condition can effectively be reversed,” she says.

“It tends to come as a lifestyle package. People feel very stressed because of their job or other pressures, this releases cortisol in the body which can then lead to fat around the middle which is very hard to shift.”

So, it makes sense for people to get more exercise which releases stress and helps them get trim: a virtuous circle. This sounds like common sense, but it’s not the whole story. As Marilyn points out, poor diet is a precursor of diabetes, and at the heart of that particular problem is our society’s growing addiction to sugar.

Every so often the definition of what we consider healthy alters radically – and that’s definitely what’s happened in the see-sawing relationship between sugar and fat. Rewind five years and you’ll find health experts berating ‘bad’ fats and treating sugar as, while not a wholly good thing, more of a minor irritant.

Today things have changed: fat (eaten in moderation) is being reassessed for its heart health properties while sugar is now public enemy number one, vilified by politicians and health campaigners alike.

This is mainly due to the work of activist groups like Action on Sugar, who have highlighted just how much sugar is added to our diets through everyday food.

The World Health Organisation confirmed this mood with new guidelines, released earlier this year, that recommended adults and children reduce their daily consumption of sugar to less than 10% of their total energy intake, cutting down to six teaspoons of sugar a day or less for the best benefits.

“Sugar is the root of the problem,” says natural health expert Patrick Holford.
“We are eating up to 50kg per person in a year. Even many so called health foods are loaded with fast-releasing ‘natural’ sugars while ‘healthy’ bars are sweetened with dates, drinks with grape juice, and cereals with raisins.

“We just need to have less sugar. Juices are particularly bad because nature never gives fruit without fibre. Consequently it’s very hard to eat three oranges but easy to drink the juice.”

The journey to eating less sugar starts with getting religious about reading labels and learning the tricks manufacturers use to hide the white stuff in plain sight.

“You’ve got to look hard at ingredients,” confirms Glenville.

“Sugars may be listed as several things so it doesn’t come up as the main ingredient in a product. Look out for any word ending with ‘ose’ – like dextrose, fructose and sucrose – it’s all still sugar. Also look out for corn syrup as well.”

Thankfully, as sugar becomes more of a focus for the food industry (and the health food industry) brands are under pressure to reduce added sugar in their products.

Some are also choosing to sweeten their products with natural sweeteners – many of which started life in the health store sector. For instance, stevia, which was ‘discovered’ in health stores was a key part of Coke’s push to appear healthier. Its widely hyped Coke Life launch relied on a dose of stevia to keep it sweet (accompanied, as critics pointed out, by a hefty four grammes of sugar).

Sweeteners, especially natural sweeteners, seem a smart way to boost sweetness while reducing sugar, but Glenville points out that there can be drawbacks.

“Most sweeteners are still chemicals, so I’m a bit wary of them,” she says.
“There’s also some evidence that having given people a ‘sweet hit’ without calories they’ll then seek out those calories somewhere else.”

For Holford, the low GL (glycemic load) diet which he advocates in his talks and books is a good way to protect people from diabetes by changing he way they eat.

“The principles of following a low GL diet are not difficult,” he says.

“Combine protein with carbs: a maximum of a quarter of a main meal should be carbs, leaving a quarter for protein foods and half for veg. Eat less and more often – three meals a day, plus two low GL snacks.”

Over the next few years diabetes, because of its close links to obesity, will be under the media spotlight even more often. The challenge now is to provide the health store solutions that inspire healthier eating and help turn the tide against this global threat to our wellbeing.

“On the other hand, processed foods high in sugar are normally also high in refined carbs and fat. So you get a double whammy of white powders: both refined sugar and refined flour.”

4…but be careful with fruit juice and smoothies Though modest amounts of fruit juice or smoothies are fine remember that they come packed with calories without the fibre and added vitamins you find in the whole fruit.

Natural approaches
Of all the natural help for diabetes that is available, chromium seems to be one of the most promising. Academics have advised that more studies are needed around is effects, but the EFSA has approved its use for the maintenance of blood sugar levels.

Highlighting one study, the associate professor of medicine at the University of Vermont announced that “Prior human studies have suggested that chromium picolinate decreases insulin levels and improves blood sugar metabolism in both obese people and people with type 2 diabetes.”

Pharma Nord has organised a consumer push for its high quality BioChronium product by getting behind a ‘Kick your sugar habit’ campaign.

“For most people, both pre-diabetes and type 2 diabetes can be prevented by maintaining a healthy weight, improving dietary intake and taking regular exercise. However, our research shows a need for greater action to protect against the onset of the disease,’ says Bent Henriksen (OBE), managing director at Pharma Nord.

“While the risk of contracting Type 2 diabetes increases with age, just one in three of those aged 45 and older say they eat healthily to decrease the risk of becoming ill. In addition, less than one in ten adults is aware that there are supplements to lower blood sugar.”

“At Pharma Nord, we launched a ‘Kick your sugar habit’ campaign to highlight the risk of developing high blood sugar and the benefits of chromium in your diet to control blood sugar levels.”
Chromium also features in Patrick Holford’s Cinnachrome product, which includes cinnamon too. 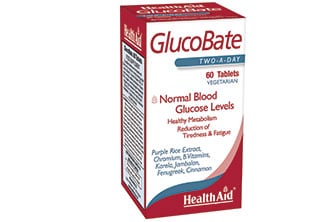 GlucoBate tablets formulated using the most beneficial nutrients and herbal extracts. Chromium contributes to the maintenance of normal blood glucose levels. Vitamin C, Niacin, Vitamin B6 and B12 to boost energy levels. Vitamin B6 also contributes to normal glycogen metabolism, regulating the release of stored glucose. Biotin and Zinc are involved in normal macronutrient metabolism, including the body’s utilisation of carbohydrates. GlucoBate also combines natural herbal extracts such as Fenugreek, Karela, Jambolan, Banaba and Cinnamon, which have been known for their reputed blood sugar controlling properties.  Glucobate retails at £11.99 for 60 tablets. Contact HealthAid Ltd on  020 8426 3400 for purchase and stockist information or visit www.healthaid.co.uk 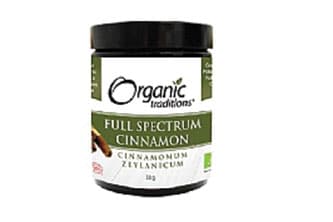 As one of nature’s most revered botanicals, Cinnamon has been used for centuries as an important herbal remedy in Ayurvedic Medicine. Extracts of cinnamon have been shown to improve blood glucose, triglyceride and LDL cholesterol levels, so can be helpful for balancing blood sugar levels. A proprietary full spectrum process gently extracts the full array of phytonutrients, without the use of harsh chemicals, solvents or high heat, offering the complete signature of the herb in its most potent and pure form. This free-flowing soluble powder can be taken as is or added to any beverage, smoothie or recipe. RRP: £9.99 (33g)

Optimum Nutrition for a Healthy Metabolism 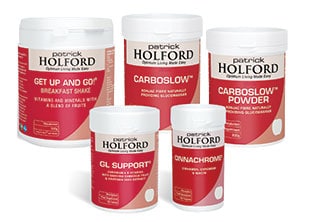 Patrick Holford’s low-GL diet is the perfect way to manage metabolism and weight. Unlike other diets that can cause negative side effects  –  high protein or low fat for example –   the only side effects from a low-GL diet are extra energy, better mood and memory, and clearer skin! Patrick’s metabolism support supplements are ideal to be taken while following his low-GL diet.

•  Cinnachrome®  a powerful combination of chromium and cinnamon  to help balance blood sugar
•  Carboslow™  available as capsules or powder, contains glucomannan, a highly absorbent plant fibre that makes the stomach feel full
•  Get Up And Go!®  a delicious breakfast shake with vitamins, minerals, essential fats, protein and fibre, with a blend of fruits
•  GL Support® with B vitamins and three supporting nutrients – garcinia cambogia, 5-HTP and chromium
Patrick Holford supplements and books are available from Natural Wellbeing. 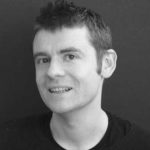 Mandatory living wage will be “devastating” for small shops, ACS warns
Fruit of the palm