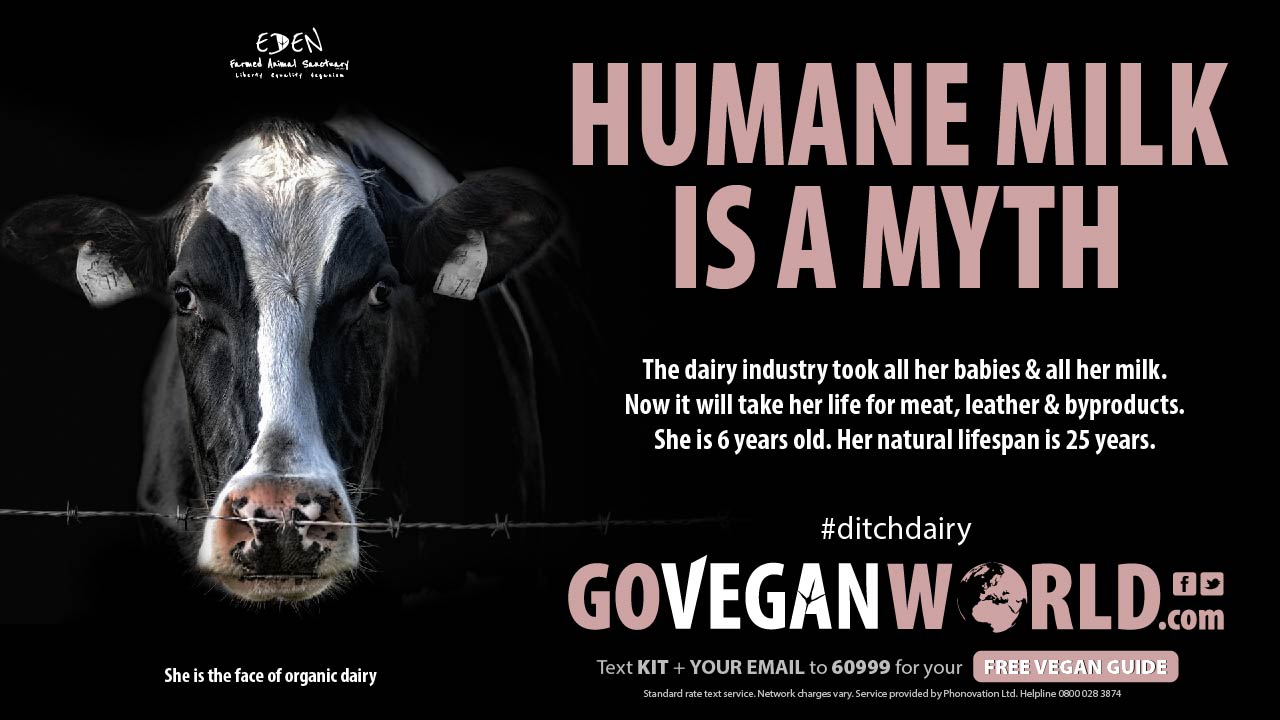 An ad stating that “Humane milk is a myth” has been cleared by the Advertising Standards Authority following complaints from members of the dairy industry that it was inaccurate and misleading.

The national newspaper ad for Go Vegan World, a vegan campaign group, in February featured a photo of a cow behind a piece of barbed wire and the headline “Humane milk is a myth. Don’t buy it.”

Smaller text stated: “I went vegan the day I visited a dairy. The mothers, still bloody from birth, searched and called frantically for their babies.

Seven complainants argued that the ad did not accurately describe the way that dairy cattle were generally treated in the UK, challenged whether the claim “Humane milk is a myth” and the accompanying claims were misleading and could be substantiated.

Go Vegan World said that the phrase “still bloody from birth” was simply an indication that the cow was a new mother. It said that mammals, including cows, were bloody from birth for more than two weeks post-delivery. It provided the ASA with several papers to support its evidence.

Go Vegan World said it believed that the phrase “fresh from their mothers’ wombs” would be commonly understood as applying to a very young infant or neonate. It said that in the dairy industry, the neonatal period was commonly defined as being from delivery until 28 days of life. During this time, calves were particularly vulnerable to illnesses and in need of their mother’s care. The group said that “fresh” was a term commonly used in the dairy industry to refer to calves, or to cows that had recently given birth. It said the “fresh” period lasted for at least two weeks after birth and provided examples of articles that used this terminology.

Go Vegan World said it believed that consumers would understand the claims to mean that calves were separated from their mothers at a very early stage in the cow and calf relationship, and not specifically prior to 12–24 hours after birth.

Clearing the ad, the ASA said it understood the complainants were concerned the ad implied a significant number of dairy farms did not comply with animal welfare standards in place in the UK, and milk production was therefore “inhumane” in that sense.

But it concluded: “We understood that Defra recommended that calves should be kept with their mothers for at least 12 and preferably 24 hours after birth

“Although the language used to express the claims was emotional and hard-hitting, we understood it was the case that calves were generally separated from their mothers very soon after birth, and we therefore concluded that the ad was unlikely to materially mislead readers.”

The Authority concluded that the ad would not be misleading to consumers, and did not breach advertising rules.

Go Vegan World says ASA’s decision represented a “landmark ruling”. It said that the complainants has “entirely missed the point of the ad”.

Go Vegan World’s director, Sarah Higgins pointed out: “The aim of the ad is to let people know that no matter where the milk and dairy products they purchase have come from, whether an industrial-scale dairy farm or a smallholding, for each cow, legal, standard practice necessitates her pregnancy, the removal of her calf, and her slaughter, so that we can drink the milk that she produced to feed her infant. The ad highlights that the problem faced by animals in the dairy industry is not how they are treated, but that they are used at all.”

But David Bowles, director of communications at the Royal Society for the Prevention of Cruelty to Animals (RSPCA), has criticised the language used in the ad. He said: “They used very emotive and anthropomorphic language, applying human emotions to a calf or dairy cow. I don’t believe we have scientific evidence to support that.”