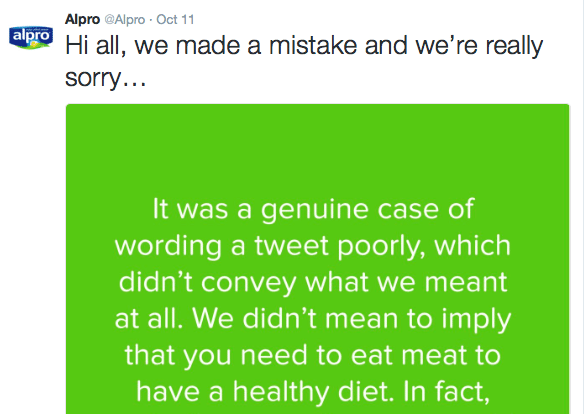 Alpro has apologized to its customers after it used its twitter feed to advise that “a healthy diet consists of 2/3 plant based food and 1/3 animal based”.

The tweet created an instant backlash from vegan customers, some of whom speculated that the tweet had been instigated by Alpro’s new owner, dairy products giant Danone. @CambriaCeltica quoted Alpro’s own rapid follow up tweet – “Oh dear, I think we got our marketing campaign wrong this time!” – with her own comment “how to lose the vegan £ in 1 tweet”.

Later, Alpro tweeted a further apology, stating: “It was a genuine case of wording a tweet poorly, which didn’t convey what we meant at all. We didn’t mean to imply that you need to eat meat to have a healthy diet. In fact, quite the opposite – we would encourage everyone to eat more plant-based foods.”

Many of those who took to social media were clearly were unconvinced by the apology, and some pledged to switch brands.

Peter Wennström, founder of the Healthy Marketing Team, diagnosed a “clash of consumer cultures and brand values”. He told nutraingredients.com: “The first is the internal clash of corporate cultures between a niche focused Alpro business and the volume driven Danone business. The second is the clash between the brand values of vegan Alpro and dairy Danone.”