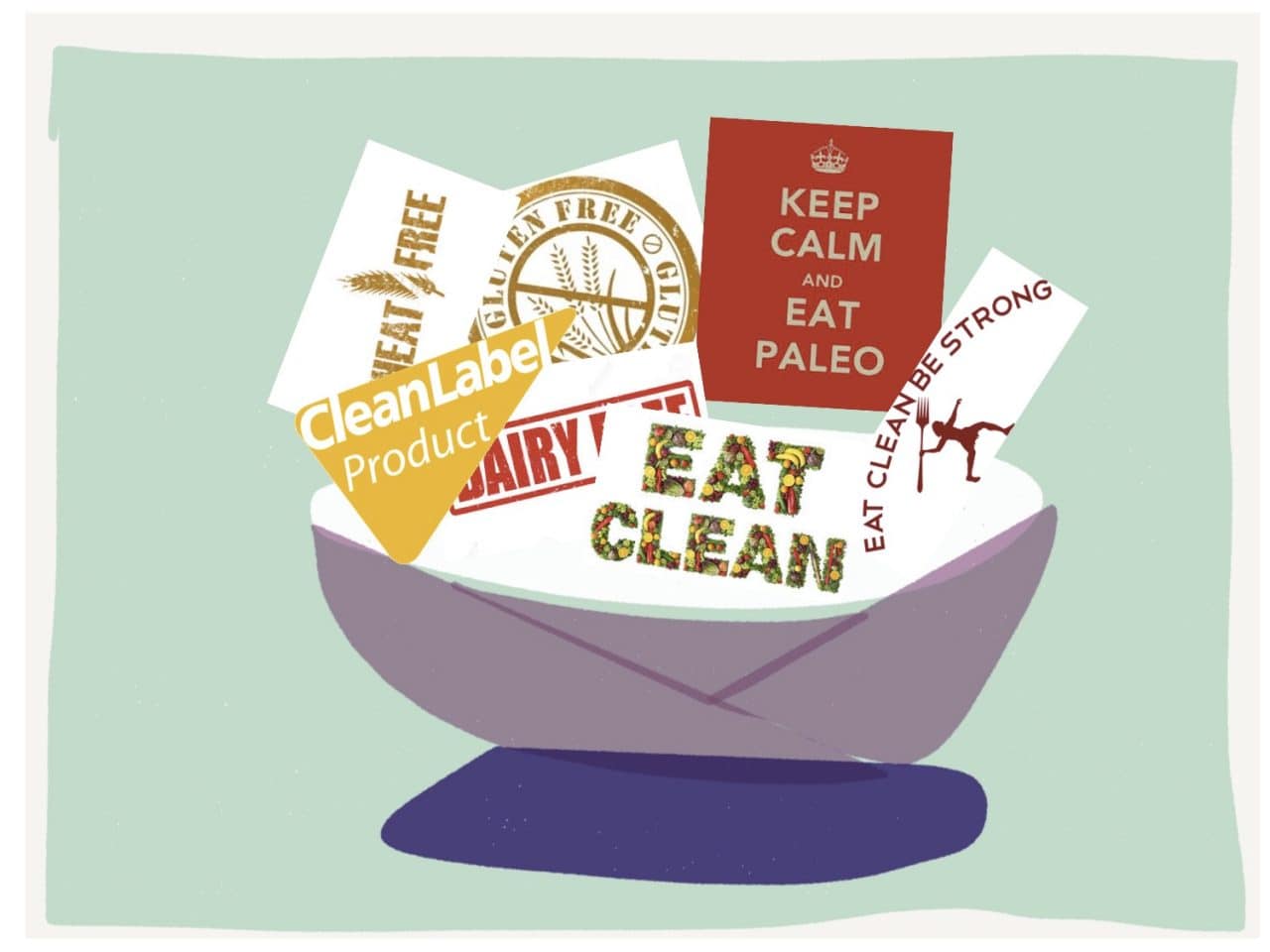 Critics of strict food avoidance regimes warn they are leading down a road to nutritional reductionism. Jim Manson asks if they are right

What do the big dietary trends of the last few years – clean-eating, gluten-free, Paleo, raw vegan and FODMAP diet among them – have in common? Well, to some degree or another, they all advocate the elimination or avoidance of particular foods (sometimes whole food groups) or ingredients.

In specific cases – for example, food allergies and ethical veganism – eliminating particular food types or allergens makes complete sense. But the idea that has been gathering pace is that food avoidance per se is a good thing – that it’s a healthier, more virtuous (‘guilt-free’, ‘clean’ are the code words) way to eat.

The worry, being voiced by food disorder specialists and some nutritionists, is that this can lead to a confused relationship with food that can easily tip over into outright fear of food.

There is particular concern around so-called clean-eating diets. Although clean-eating’s proponents promote it as ‘a happy and healthy lifestyle’, in some cases it is anything but. Earlier this year, Dr Mark Berelowitz, an eating disorder specialist at the world-renowned Royal Free Hospital, warned that the clean-eating regimes promoted by popular food bloggers and websites can be a “catastrophe”. He told the Sunday Times said that 80%-90% of his patients at the Royal Free followed clean eating diets, which exclude or severely restrict dairy, gluten, carbohydrates, sugar, and meat.

Deliberate myth
Berelowitz says that calling these types of eating regimes ‘clean’ is “a deliberate marketing myth that emphasizes one approach to eating at almost any cost”. His own professional experience has shown him that the people most likely to be attracted to such ideas are “people who are already overly self-critical”. It’s why, he says, they are dangerous for anyone who “is battling to hold on to their health”.

But it isn’t just clean eating that’s coming in for criticism. Free-from – and gluten-free in particular – has been attracting its own unflattering headlines. Here, the principal charge is one of creating, and profiting from, false needs.

Critics argue that the gluten-free industry is happy to ride a wave of misinformation about the health impact of gluten in the modern, Western diet. It’s well documented that a significant percentage of consumers of gluten-free food don’t have either diagnosed coeliac disease or non-coeliac gluten sensitivity, and are choosing gluten-free products as a way of preventing developing these conditions, or because they perceive them to be a healthier option.

The picture for gluten-free is certainly complicated one. While the number of people with coeliac disease (caused by a reaction to gluten) is estimated to be around one in a hundred, this serious autoimmune disease is thought to be significantly under-diagnosed – and is still increasing in prevalence. Then there is challenge of non-coeliac gluten sensitivity (NCGS), where people who don’t have coeliac disease experience gut symptoms after eating gluten (one UK study found that 13% of people said they had symptoms after eating gluten).

The growing interest in NCGS encouraged Australian researchers to study the effect of gluten on people that self-diagnosed with gluten sensitivity. Their first study, published in 2013, appeared to provide the first proof of gluten-sensitive irritable bowel syndrome. But in a follow up study the same scientists disproved their original findings concluding that the intervention that made the study participants’ symptoms better was not actually a gluten-free diet, but a low FODMAPs diet. FODMAPs are the short-chain carbohydrates found in widely consumed fruit, vegetables, grain and dairy products that already implicated in IBS – and they make the picture even more complicated.

Steam roller effect
Professor David Sanders heads up the Sheffield Institute of Gluten-Related Disorders. Based on current evidence, he says that, “the general population does not need to avoid gluten”. And in his book Gluten Attack, he makes this distinction: “Those people who have recognized they have symptoms when they eat gluten and may have even noticed they feel better on a gluten-free diet are very different to someone who simply believes they should not eat gluten or that gluten is somehow harmful.” Sanders is respectful and supportive of anyone who suffers symptoms and who tries to find their own solution, but he says that a “steam roller effect is occurring against gluten”.

But away from these particular dietary battle lines (clean-eating and gluten-free have each generated hundreds of for-and-against articles – and entire books, The Gluten Lie and Grain Brain to name just two), maybe there is something generally troubling about our changing attitudes to what and how we eat.

One argument says that promoting ‘special diets’ as a lifestyle choice risks narrowing our food horizons and setting us on the road to nutritional reductionism. Instead of encouraging a wide and varied diet – and celebrating food diversity – it turns us into ingredients obsessives and label watchers who apparently place the highest value on what is absent from food.

“…. it turns us into ingredients obsessives and label watchers who apparently place the highest value on what is absent from food”

Michael Pollan, a hero of the natural food movement in the US, has warned that in America an unhealthy obsession with healthy eating has itself become a national eating disorder. He has also acknowledged that food anxiety directly benefits the food industry, nutritional science and the media. A question then for our own sector, perhaps, is how does this sit with our wholefood and health food traditions. Are we offering solutions, or do we risk being seen as part of the problem?