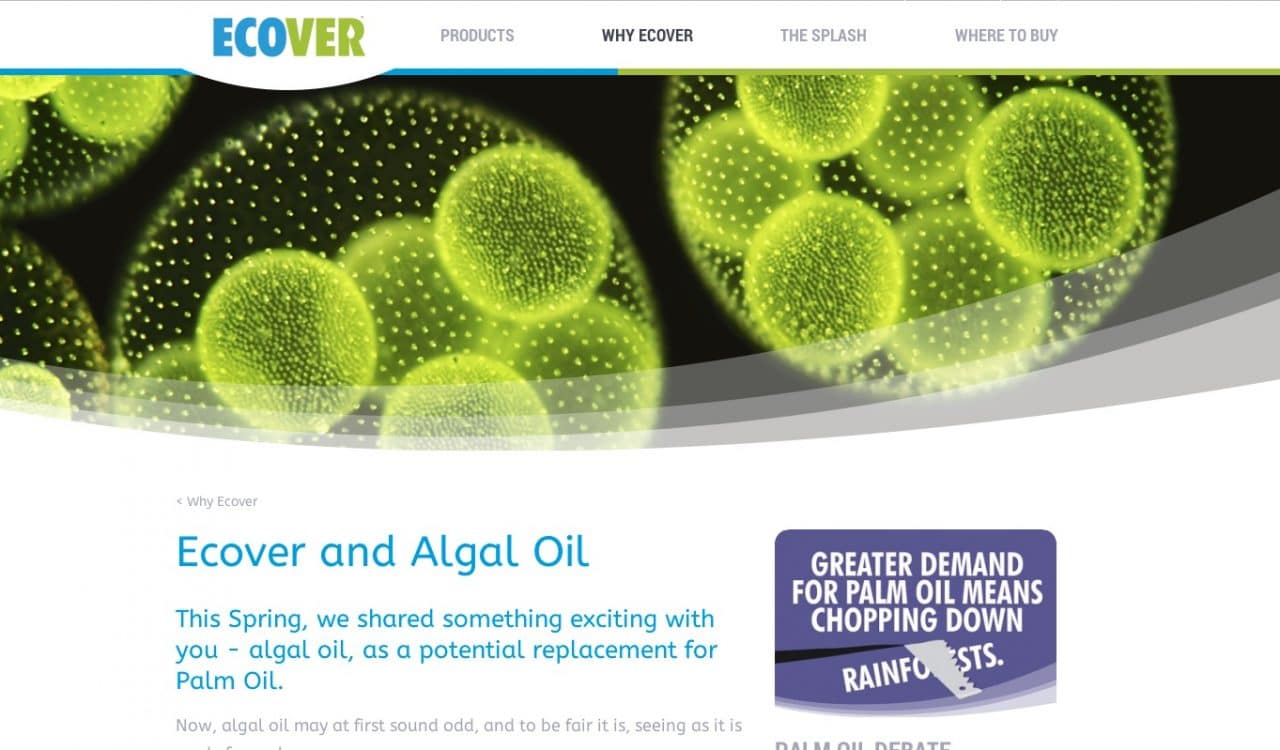 Ecover says it has put on hold commercial trials of algal oil while it debates with NGOs and scientists on the biotech process used to produce it. But the company has strongly refuted claims by an activist group that it is using synthetic biology – a form of genetic engineering – to produce the ingredient.

Ecover’s announcent comes as the green cleaning pioneer is accused by the ETC Group of employing “extreme genetic engineering” and an online petition calling on it to abandon “synthetic biology-derived ingredients” has gathered over 10,000 signatures.

Ecover announced in April that it had been developing an algae-derived oil as part of a strategy to find alternatives to petroleum and palm oil ingredients. Ecover’s head of research and development, Dirk Develter, told The Guardian at the time: “Algal oils have a much smaller ecological footprint than most tropical oils, such as palm oil, making them ideal for home products, where tropical oils are widely used.”

The development attracted the interest of environment and anti-GM groups in the US (where Ecover-owned brand Method is based) and Canada. It was also picked up by the New York Times, which recently ran a lengthy article headlined ‘Companies Quietly Apply Biofuel Tools to Household Products’. In the article Ecover’s long term innovation manager, Tom Domen, confirms that the algal oil production process used by the company involves the algae’s DNA sequence being changed in a lab.

The Ottawa head-quartered ETC Group, which campaigns for cultural and ecological diversity, describes synthetic biology (shortened to ‘synbio’) as “extreme genetic engineering” and is using the phrase to describe Ecover’s algal oil. The group set up the online petition Synthetic Biology Is Not Natural, which specifically targets Ecover and Method. Its 2 June dated ‘open letter’ to Ecover (signed by a number of north American and international groups) asserts that synthetic biology-derived ingredients are a “false solution” to the problem of unsustainable palm oil, and that their use would disqualify products from using descriptors such as ‘natural’ and ‘green’.

However in a statement Ecover says that the term synthetic biology is “extremely misleading” and “inaccurate” in the case of its algal oil.  Acknowledging that “more extreme uses of the technology exist” the company says the process it is using “embraces the natural functions of organisms”.  It also points out that its algae-derived oil has been subject to independent assessment for human and environmental health, and that the sugar used as feedstock is grown sustainably on existing agricultural land.

Ecover says that while it remains committed to identifying sustainable agricultural sources, it also believes it has a responsibility to embrace new technologies to develop “future proof” ingredients resources.

The company told Natural Products: “Assuming because something is natural, it is also more sustainable, is an over simplified view on things. We take inspiration from nature and follow nature’s logic, but we don’t blindly assume that because it is natural it is better. We use environmental science to make a well informed decision.”

“We take inspiration from nature and follow nature’s logic, but we don’t blindly assume that because it is natural it is better”

Questioned about the current status of products containing algal oil, Ecover said: “We are in the early stages of a trial using algal oil in our products. It has been tested in a single product, in one batch of 6,000 bottles, in Europe alone and with algal oil included in the ingredient list.”

Following concerns raised by certain NGOs, the company says it has “put on hold” further steps to use algal oil until these concerns have been debated. In its statement it says: “.. only after this debate and with broad stakeholder support will we consider starting to use it more widely. In this event we will label it clearly and support the decision with a clear statement about the technology on our website.”

• Ecover has replied more fully to criticism from the ETC Group in an article in The Ecologist.