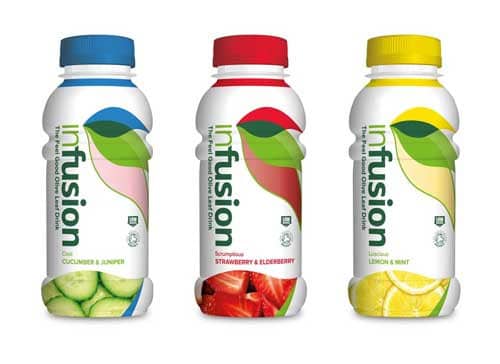 Olive leaf supplements specialist Ovio is set to make waves in the fast-growing healthy soft drinks category with the launch its InFusion range.

The new range of organic, low-sugar drinks was unveiled at a high profile press briefing earlier this month hosted by ITV This Morning presenter Gina Akers.

Ovio co-founder Dom White, talked to NPN about the thinking behind the drinks range and the young company behind it. “Susan and I started the business about three years ago. Before that we’d lived in Italy for seven years and really got to know a lot about about health and nutrition – the amazing local food culture was the inspiration initially. We started studying the olive tree, and particular the amazing health properties of the olive leaf. The valuable antioxidant effects of polyphenols such as oleuropein and hydroxtyrosol are very well documented, and they are present in much higher levels in the leaf. Olive leaf has been shown to be good for a healthy immune system, it support heart health and can lower cholesterol – and there’s an EFSA claim for it around protecting against oxidative damage.

“Armed with the research we came back to the UK in 2006 and began making our own olive leaf tonics. Then three years ago we launched the Ovio supplements. They’ren a blend of olive leaf and calendula flower in the form of a drinkable supplement – they’re very much a modern, lifestyle supplement. They’re now in 600 Holland & Barrett stores, Planet Organic, Boots and, of course, independents.”

“We wanted something that was less like a supplement and more of a beverage. Something that would be more accessible in terms of both price”

Now the company is aiming to lead olive leaf into new waters. “We wanted something that was less like a supplement and more of a beverage. Something that would be more accessible in terms of both price (the drinks have an rrp of £1.50) and taste. With the InFusion range we’ve aimed to create a healthy alternative, a better choice drink. The range is all organic, veggie and vegan – and very low in sugar, at the equivalent of just one teaspoon of sugar from fruit juice.

“With all the interest in sugar, the timing of the launch is fantastic. But the work we did on taste tests – we did lots of the them – has paid off too. We aimed for a really light tasting drink that’s also healthy and unique. Early reaction has been great so we’re really exited about where InFusion can take Ovio in the next stage of its development.”