HiSbe, which operates as a social enterprise, has made an offer for a former Tesco store.

HiSbe says it needs £190,000 to cover all the costs of opening its second store.

In late December it staged a crowd-funding event aimed at ensuring that the business is “investment ready” for the next stage of development. Earlier in the year it had lined up financial backing in the form of match-funding from two big social business funders, CIVA and UnLtd.

With crowd-funding pledges already at £64,000 co-founder Ruth Anslow is confident hiSbe will hit its target. “First we need to secure the site, to keep the chains out. But the minute we pass £85k, we’re off!”.

Commenting on the December event, Anslow told NPN: “We had a really good turnout and there was a celebratory, party atmosphere. We updated people on where we’d come from – and we asked them if they were up for doing the same thing again. We had some really great talks from some of local suppliers, for example a local pig farmer and a dairy producer. The dairy lady gave a really quite emotional talk, explaining how a second hiSbe store would allow her to extend her herd and rescue cows from life in an intensive dairy.” 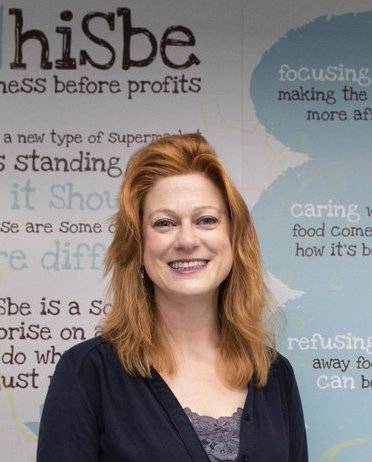 Around 40% of hiSbe’s suppliers are local (in this case meaning Sussex). A second store will offer the opportunity to double their sales, says Anslow. “This is an ideal way for smaller suppliers to grow, store by store. For us it’s all about keeping 50p in every pound spent, in Sussex. With regular supermarkets just 5p stays in the local economy. We’re also ensuring that 68p in every £1 spent in store goes to the supplier.”

Anslow adds: “We’d like to get the keys to the new store in our hands by the end of March. Then we’re looking probably at a ten-week period to get the store ready for opening. We want to capture everything that makes this store work and replicate it.”

“Over the next five years we want to build a local chain in Brighton, Hove and Shoreham”

She describes hiSbe as “more mainstream” than traditional wholefood and health food retailers. “We’re all about bringing good ethics to supermarket retailing and challenging the food system. And we’re ambitious about making a bigger impact. Over the next five years we want to build a local chain in Brighton, Hove and Shoreham, and then we’ll start looking at other parts of the country.”

So what is it that hiSbe’s growing ranks of customers like about the store? “People generally talk first about the friendly staff and the vibe, then it’s the range and ethics, the prices – ‘it’s cheaper than we thought’ – and our eco-friendly values following on from that.”