Home » News » Industry News » Brexit – a case of be careful what you wish for?

If you think that a British exit from the European Union would result in an instantly more favourable regulatory climate for the natural products industry – well, you might want to think again.

The question of how a Brexit would impact our industry was raised during a post-lecture Q&A session at last week’s Health Food Institute lunch. Robert Verkerk, scientific director of the Alliance for Natural Health – who gave this year’s HFI lecture – was asked directly if he thought that the UK industry would benefit from a British exit. 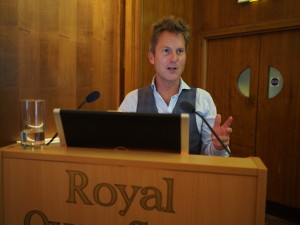 He told the audience of retailers, brand owners and industry leaders: “My sense is that if I had confidence that the regulators in this country were incredibly forward thinking and that all their particular views were forced on them by the EU, and that they didn’t really support them themselves – I’d say let’s do it as quickly as we can.

“The reality is that there are some of us in this room who have actually eyeballed some of the new appointments at the MHRA, and when you start to look at what is going on in their heads you see you’re dealing with some of the biggest bean counters the world has ever created – people who like to see as many rules as they possibly can. My sense is that if they didn’t get them from the EU they’d get them from elsewhere.

“As it happens some of the best things we can use to defend this industry are initiatives that are going on outside this country. For example, the PlantLIBRA Project and BELFRIT, and some of the case law in the European Court of Justice as well – so I’m going to park.

“The danger about supporting a British exit for this sector is that you will alienate more people, and I believe the solution should encompass people who are on both side of that divide”

“I strongly believe the solutions here are about taking a non-partisan approach. The danger about supporting a British exit for this sector is that you will alienate more people, and I believe the solution should encompass people who are on both side of that divide. The issues go well beyond natural health and often sit somewhere in the genetic level in people. It’s a bit like in America, where they say people are born republican, or born democrat!

“So, in short, I think that if we did leave there wouldn’t be many changes. So let’s not make that the central part of the positive change we all want to see for this industry.”

Contributing to the discussion, Graham Keen, executive director of the Health Food Manufacturers Association, predicted that there would be considerable uncertainty on both the impact and timescale resulting from a possible British exit from the EU. “Our understanding is that there would be a four-year extraction process. So you wouldn’t see change overnight. Changes that did eventually come would be likely to take place within the medium to long–term, and a lot can happen in four years.”