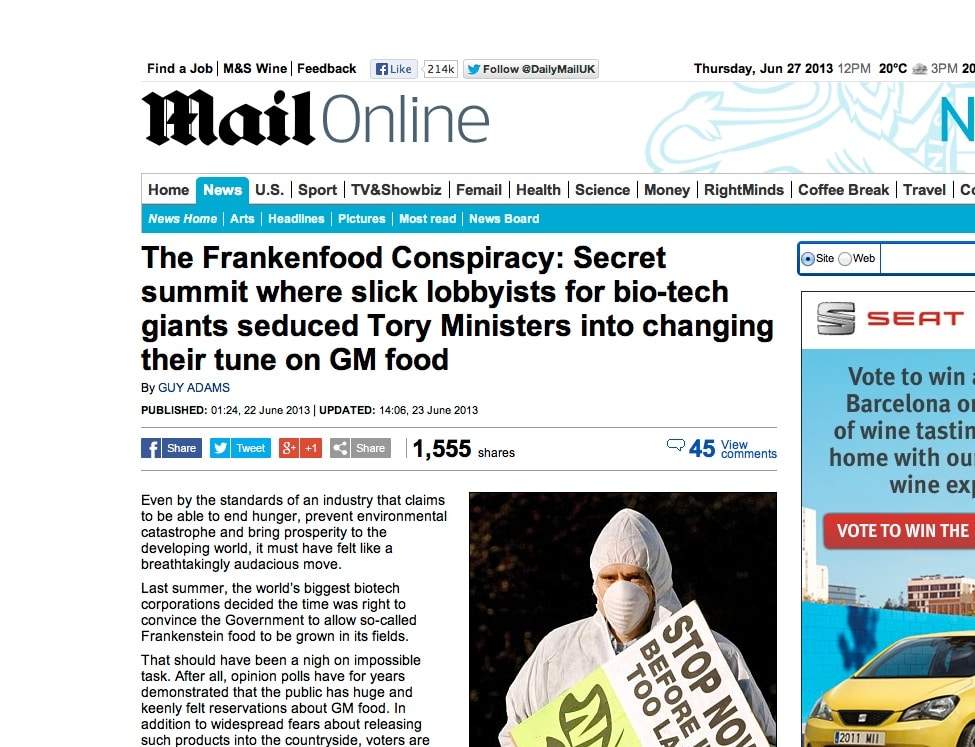 A Daily Mail investigation has revealed how the biotech industry gave ministers and senior Whitehall officials a corporate mugging at a secret meeting in London last year.

The Mail reports that the meeting was called by the GM industry trade body The Agricultural Biotechnology Council. ABC, it says, invited senior ministers and top civil servants to a “round-table discussion” with leading biotech forms – including Monsanto, Bayer and Syngenta.

Despite being held in a publicly owned property – the Westminster Conference Centre – the meeting went unreported by the national media and held behind close doors. However Freedom of Information requests made by Daily Mail features writer Guy Adams reveal that the two-hour meeting amounted to a major coup for the GM industry.

Over mineral water, coffee and organic biscuits the biotech giants were able to press their case – entirely unchallenged – to ministers and policy makers. According to minutes of the meeting obtained by the Mail under FOI laws, there was agreement that the Government should “introduce incentives for investment” in biotechnology and to consider “improvements in the regulatory framework” governing it. The meeting also agreed that Britain should take a “clear position” on Europe’s GM ban and called for schoolchildren to have a fuller “education” on GM and plant science.

The Mail says the secret meeting appears to have been the catalyst for a major pro-GM offensive by the Government, which has taken no account of continuing public support for a ban on GM (71% of people polled by Which? recently said they supported a ban on GM food and meat from GM fed animals).

Environment groups say they have been frozen out of the “debate” on GM. The Soil Association’s policy director Peter Melchett told the Mail: “We haven’t had one meeting on GM since this Government was elected.”