Senior political figures from across Europe gave their unequivocal support for the organic food and farming sector at a major conference in Germany last week.

Speaking during the opening debate of the Biofach Congress in Nuremberg, Sharon Dijksma, the Dutch agriculture minister, said: “We should be very proud of our organic farmers. Organic is one of the fastest growing food sectors and the industry merits all the focus we can put on it. 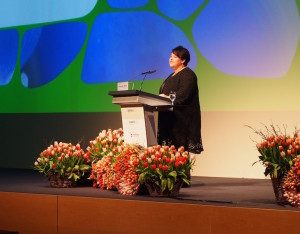 “From a European point of view we really should be getting behind organic, and supporting it.”

Robert Kloos, Germany’s state secretary for food and agriculture, attending his fifth Biofach event , said that organic offered important solutions in “helping ensure that we feed the planet while protecting natural resources”. His views were echoed by the country’s agriculture minister, Christian Schmidt, who said organic had the opportunity to show that “efficiency and sustainability can go hand in hand, in key areas such as climate, soil and groundwater.” He added: “I see the regional (local) movement as a twin sister to organic – if you know where your food comes from, you have more trust in it.”

organic. He told the packed conference: “Two weeks ago we published a new strategy document for organic food and one of the signatures on it was from our minister for defence. Why? Because we have thousands and thousands of very hungry men and women in our services and obviously they should be eating organic! The main part of our strategy is that the 800,000 meals we serve a day in the public sector should be in the majority organic.”

“We have thousands and thousands of very hungry men and women in our services and obviously they should be eating organic!”

Dr Ulrich Maly, major of Nuremberg, offered evidence of local support for organic. “We want to double organic farming in Bavaria. The organic market works better – but it does need scaling up. It’s already a sizeable part of the national economy but it must now move out of its niche.”