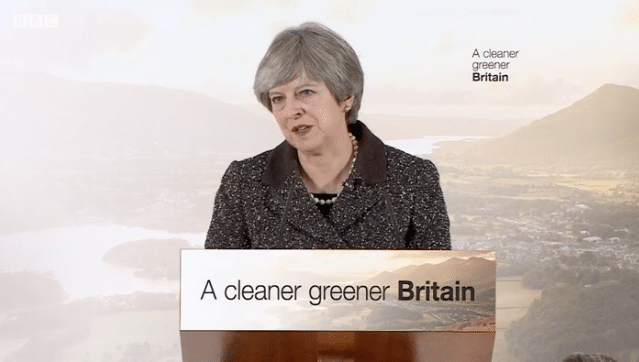 In a speech broadcast today by the BBC, Theresa May spoke of her plans to ‘nurture’ the environment through a ‘comprehensive 25-year environment plan’ which puts plastic at the forefront of the agenda.

Making a pledge to ‘protect and renew our natural inheritance’, the Prime Minister highlighted plastic waste as ‘one of the great environmental scourges of our time’, adding that future generations will be ‘shocked’ at the level of plastic production in Britain today. “We look back in horror at some of the damage done to our environment in the past and wonder how anyone could have thought that, for example, dumping toxic chemicals into rivers was ever the right thing to do,” said May.

In A Green Future: Our 25 Year Plan to Improve the Environment, the Government states it is ‘working towards our ambition of zero avoidable waste by 2050’, and while it has confirmed an extension of the 5p plastic bag charge to all retailers in England, no plans for a plastic deposit scheme appear to have been discussed; an omission Greenpeace has called a ‘missed opportunity’. Supermarkets, however, will be encouraged to incorporate plastic-free aisles into store design, and the Government says consideration will be given to the application of charges for takeaway containers and other single-use packaging items.

The plans have been announced just as Sainsbury’s hits the headlines, after an outburst of consumer criticism directed at the retail giant over its decision to sell ‘organic’ coconuts encased in plastic packaging. One customer tweeted: “How is replacing a coconut’s perfectly good shell with unsustainable plastic wrapping, a single-use plastic straw and cardboard ‘striving to avoid all unnecessary packaging’?”

Responding to The Independent, a spokesperson for Genuine Coconut – the brand responsible for what some consumers are referring to as ‘#pointlessplastics’ – said: “We can assure customers we use a range of recyclable materials to keep our organic coconut water fresh. This includes the high-tech film on the product, which mimics its original green peel and is made of entirely recyclable materials.”

The full version of A Green Future can be found here.