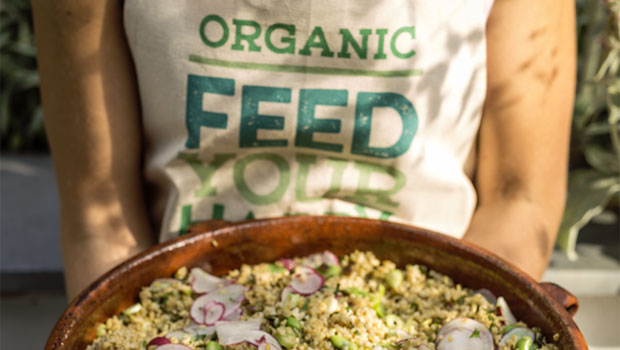 In new research commissioned by the OTB it was reported that 68% of consumers say organic food makes them happy because of its benefit to themselves, to animals and to the environment. Amongst females, this figure increases to 78%.

The EU-funded campaign connects with ‘the emotional aspect of what makes consumers buy organic’ targeting consumers who already buy some organic items: new mothers, young families, vegetarians and those interested in leading a health lifestyle. While it aims to boost sales of organic produce in the UK, Catherine Fookes, campaign director of the OTB, says the campaign isn’t about shoppers having ‘an entirely organic basket’, but rather about encouraging consumers to try more organic items.

“We’re at a tipping point for organic. We have consumer demand for organic, an industry-funded campaign in Organic. Feed Your Happy and an opportunity for retailers to take the lead – just as they did in Denmark, where organic has experienced remarkable sustained growth, with half of all Danes now buying organic food every week,” she adds.

The OTB will be working closely with major supermarkets to improve the visibility of organic items in store. “More and more consumers say they’ll buy organic food if it’s available,” says Fookes. It is also hoped that the involvement of high profile figures such as Cox and Birkett will result in similar levels of success as those seen in Denmark.

“I choose organic because I think it tastes better, it’s gorgeous, and I think it’s good for the animals and good for the planet. Food grown organically is food as it should be. Give me a knobbly misshapen organic strawberry over the weirdly uniform non-organic ones any day. To put it simply, organic food makes me happy,” says Cox, the daughter of a farmer.

The Organic. Feed Your Happy campaign will appear on roadside billboards, trains, outside supermarkets, in the press and across digital channels.