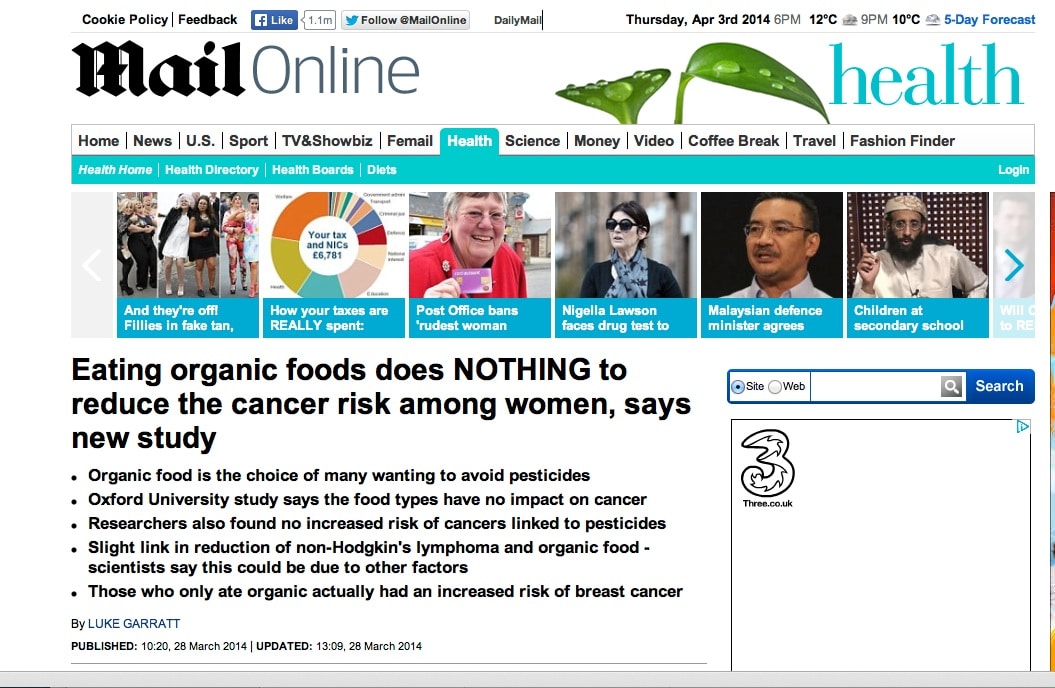 Organic groups and campaigners have criticized a study funded by Cancer Research UK that has found that women who eat organic food are no less likely to develop cancer than women who eat a conventional diet.

The researchers, from the University of Oxford asked around 600,000 women aged 50 or over, who were part of the Million Women Study, about whether they ate organic foods, and tracked the development of 16 of the most common types of cancer in a nine year period following the survey.

When looking at the results for 16 individual types of cancer the researchers found a small increase in risk for breast cancer but a reduction (21%) in the risk for non-Hodgkin lymphoma in women who mostly ate organic food.

Professor Tim Key, a Cancer Research UK epidemiologist, and one of the study authors, said: “In this large study we found no evidence that a woman’s overall cancer risk was decreased if she generally ate organic food. More research is needed to follow-up our findings of a possible reduction in risk for non-Hodgkin lymphoma.”

The charity dismissed concerns over pesticide residues in food, commenting that “there is no evidence that these small amounts increase the risk of cancer in people who eat them”.

But the Soil Association’s director of policy, Peter Melchett, said the study had “a number of (design) weaknesses” and that the Cancer charity had displayed a “poor understanding of modern pesticides”.

Melchett said: “We find it strange that a 21% decrease in non-Hodgkin lymphoma cancer, among women who reported usually or always eating organic food, is being so readily dismissed by Cancer Research UK. They seem to have a poor understanding of what pesticides are found in and how pesticides get into food. Many modern pesticides are ‘systemic’ which means they are in every part of the plant and can’t be washed away whatever consumers do when they prepare food. In any event the most commonly found pesticide in British food, according to government testing, is Monsanto’s round-up in bread because it is sprayed on wheat just before harvest. Dr Claire Knight, Cancer Research UK’s health information manager says that if people are anxious about pesticides they should wash food before eating it: we’d be interested to know how she expects consumers to wash loaves of bread.

“Cancer Research UK’s health information manager says that if people are anxious about pesticides they should wash food before eating it: we’d be interested to know how she expects consumers to wash loaves of bread”

“Compared to other epidemiology studies this one seems to have a number of weaknesses. Important confounding factors like a women’s BMI and the amount of physical activity they partake in were only measured once during the eight year study, and the researchers admit other confounding factors which were not controlled for may have influenced the findings. It’s widely accepted that studying the relationship between diet and cancer is very challenging, given that processes that lead to development of cancer can operate over a lifetime and are hard to separate.”

The journalist and campaigner, Pat Thomas, said that eating organic remained “one of the best ways to avoid pesticide residues in your food (levels of which are rising).” And she insisted that avoiding pesticide residues was a “sensible health precaution because the link between pesticide exposure and cancer is well established.”