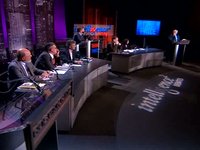 Organic won the day in a major televised US debate last week on the motion ‘ Organic Food is Marketing Hype’.

At the start of the Intelligence Squared debate —staged live in New York heard and broadcast on 200 radio stations as well as the Bloomberg Television network — 45% of the audience voted against the motion (with 21% in favour and 34% undecided). By the end the debate, the per centage of the packed audience who opposed the motion that ‘Organic Food is Marketing Hype’ had risen to 69% (with 21% in favour and 10% undecided).

During the debate the former FSA boss described organic food as a “side show” to the main global concerns on food — feeding a growing world population and providing the widest access to a healthy diet. He also repeated his earlier claim that there was “no overall consistent nutritional difference between organic and conventional food”.

But Jeffrey Steingarten said that to keep claiming organic would not feed the world “side-steps the reality that conventional agriculture isn’t feeding the world”. He added:”The forces against good food in this country are very powerful, and, yes, it’s enough to make you paranoid”.