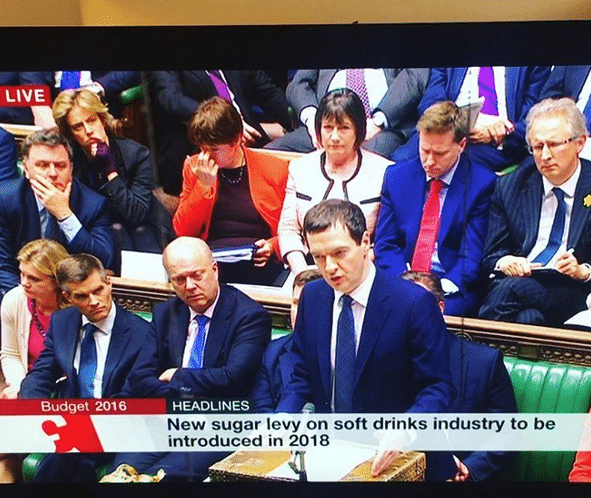 As expected, the announcement by Chancellor George Osborne that the UK Government is to introduce a sugar tax on soft drinks in 2018 has been met with mixed reactions.

The new soft drinks industry levy will be targeted at producers and importers of soft drinks to encourage them to reformulate by reducing the amount of added sugar in the drinks they sell, moving consumers towards lower sugar alternatives, and reducing portion sizes.

Pure fruit juices and milk-based drinks will be exempt as will small businesses.

This is a major turnaround from David Cameron’s previous position of firmly ruling out a sugar tax claiming that there were more effective ways of tackling the issue, and some critics say it is simply a way of moving the spotlight away from other budget issues such as cutting disability benefits.

Celebrity chef Jamie Oliver, who highlighted problems caused by excess sugar consumption in his TV programme Sugar Rush, took to Instagram: “We did it guys!! We did it!!! A sugar levy on sugary sweetened drinks … Amazing news.”

Sophia Nadur, founder of Ideas 2 Launch Limited, told NPN: “Like many folks, we were surprised to hear a sugar tax announced in the Budget as we expected this to form part of a Childhood Obesity Strategy that would have been released sometime later this year after canvassing further feedback from the industry. Nevertheless, we are delighted with the news. We took the hard decision to launch a UK-brewed range of iced teas that were from the outset low in sugar. Our co-founder is a medical doctor and I have worked for decades in the global food and drink industry, and we had come to realize the impact over-consumption of sugar sweetened beverages was having on health.”

Paula Moynihan, Professor of Nutrition and Oral Health at Newcastle University, commented: “Sugared drinks are the largest source of sugar in the diets of children in the UK and we know that current high sugar intakes are contributing to obesity and tooth decay… The announcement by George Osborne to introduce a tax on sugared soft drinks is a welcome step towards tackling childhood obesity and lowering the amount of sugar consumed in drinks. Evidence from other countries where a tax on sugared drinks has been introduced indicates taxing is effective in reducing the amount purchased and it is now up to the rest of the world to follow the example being set by the UK and others to tackle obesity and other conditions linked to sugars such as tooth decay on a global scale.”

Steve Kearns, MD of Cawston Press, welcomed Osborne prioritising the long-term health of  children, but added: “However, in isolation, this levy is not the entire solution. The industry needs to drive greater nutritional awareness and education about sugar in a healthy and balanced diet.  So a well meant policy is only effective if it works in conjunction with accurate information – consumers have to be able to make well informed choices.”

Some were less happy. In a statement, Gavin Partington, director general, of the British Soft Drinks Association, said: “We are extremely disappointed by the government’s decision to hit the only category in the food and drink sector which has consistently reduced sugar intake in recent years – down 13.6% since 2012”, adding that the targeting of soft drinks was “simply absurd”.

“The so-called sugar tax has finally come to fruition, albeit only on water-based soft drinks, so excluding pure fruit juices and milk-based drinks,” said Nicky Strong, a Legal consultant at Bond Dickinson LLP. “The levy will be calculated on the total sugar content of these drinks, and will be charged direct to producers and importers, rather than being added to the price paid by consumers. It will be interesting to see how much devil there is in the detail when the government publishes its consultation on the levy in the summer”.

The levy is expected to raise £520 million in the first year, which, says the government, will be spent on primary schools on measures including expanding sports offers, activities and breakfast clubs.