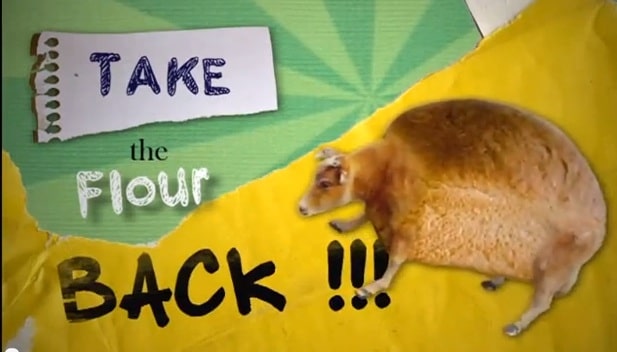 The scientists from the Rothamsted Research Institute published an open letter last week imploring anti-GM protestors not to destroy or prevent their trial of aphid-resistant GM wheat. In the letter they pledge that the results of the publically funded work will not be patented or become owned by a private company. And they stress that the GM-wheat uses a “natural plant-based” process to produce a crop that “doesn’t need to be sprayed with insecticides”.

But the protest group Take the Flour Back has rejected the case made by the Rothamsted scientists and says that by going ahead with an open air trial they will be “recklessly endangering future livelihoods of the farming community – and putting our food supply at risk”.

In a response to the scientists’ open letter, the group said: “When a powerful minority threatens democratically expressed wishes of the majority, direct action become necessary.”

The protestors are calling on everyone worried about the impact of GM crops to join in a day of “direct action” at the trial site on 27 May. They continue: “We will come together to ‘take the flour back’, celebrating the thriving wheat industry we already have in the UK, with bakers, farmers, bee keepers, allotment holders and other bread-lovers”.

Organic farmer, Gerald Miles – a member of the Take Back the Flour group – told Radio 4’s Today Programme that the GM trial risked contaminating organic and conventional wheat crops with an “alien variety”. He added: “This can spread and escalate, they can’t give us a guarantee it won’t happen.”

Defending the Rothamsted trial, Dr Colin Ruscoe, from the British Crop Protection Council, told farminguk.com: “It is particularly disappointing to hear that an organic farmer is aiming to join in the proposed decontamination, ie. to destroy work on technology that could lead to many of the benefits that supporters of organic agriculture espouse – particularly reduction in the use of pesticides, and maximisation of biological control.”