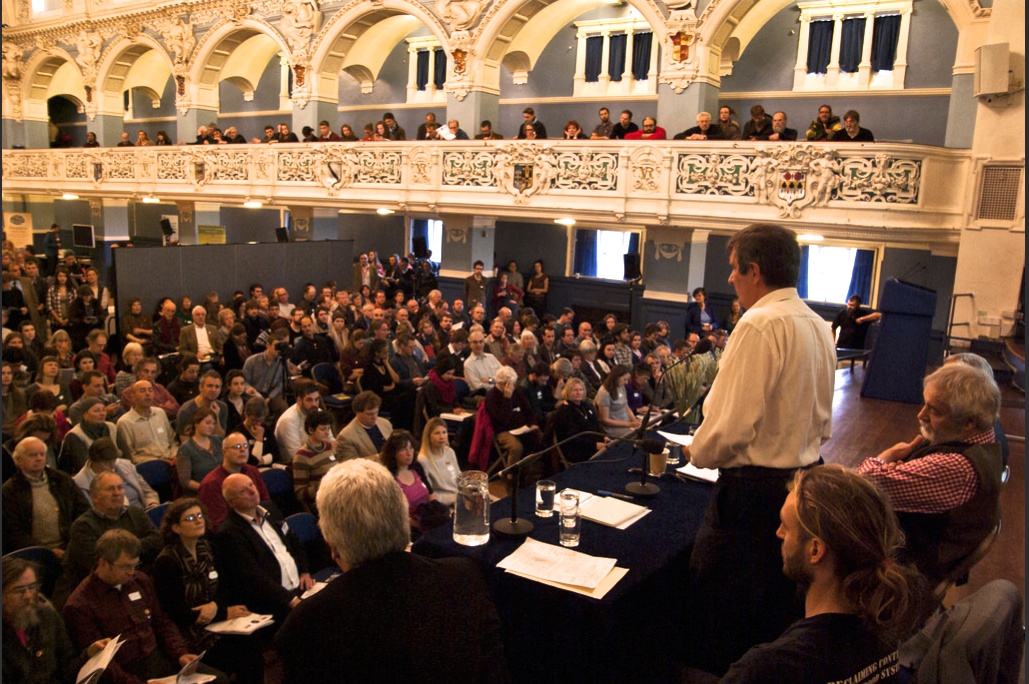 The clash of the New Year farming conferences in Oxford has now swung in favour of previous ‘upstart’ the Real Farming Conference, says Michael Wale

Launched in 2010 as an alternative to the establishment Oxford Farming Conference – “not to attack the status quo but to ask what the world really needs from farming” – the Real Farming Conference has been busy spreading the organic and agroecological message, in contrast to the ‘agri-business as usual’ thrust of its bigger brother.

The bold move of the Real Farming Conference to book the whole of the Oxford Town Hall for two days paid off, with a record 650 paying crowd in attendance. The confidence of the organisers, and the impressive turnout this year, prompted David Gardner, chief executive of the Royal Agricultural Society, to declare the Conference as “an extraordinary event now, full of real farmers”.

Gardner was on the panel at the Soil Association’s event which it co-presented with the Woodland Trust at the official Oxford Farming Conference’s fringe meetings on the evening before the Conference proper opened, under the title Britain’s Soil Security: Farming’s Most Precious Asset.

Mark Kibblewhite, professor of Applied Soil Science at Cranfield University pointed out that 2015 is the United Nations Year of the Soil. He said: “The cost of soil management really is not that great. In the farm plan, more thought should be put to land capability. Soil is alive. It’s a living system. It’s an engine – to put fuel in, you put in organic matter”.

Helen Browning, the Soil Association’s chief executive, noted that if she had been given £1 for every time someone had advised her to change the name of the Soil association she would be very rich. But, she said: “After 70 years farmers are beginning to take soil seriously”. It’s all our task, she added, (with a smile that acknowledged the challenge) to “make soil sexy with the public as well as farmers”.

Browning has done much to expand the role of the Soil Association and open it up to a wider public. Expressing this policy she told the meeting : “We’re keen to join with farmers non-organic, or organic, coming together. Getting the public interested in farming we should tell them about the soil.”

And she outlined a programme that would aim to underline this policy, saying: “We’re going to be working on interaction at the Eden Project, and smaller science centres. About 20 million people a year visit these centres.” But Browning said there was a real need for a high profile science ambassador for the cause: “We need a Brian Cox for soil”.

“But Browning said there was a real need for a high profile science ambassador for the cause: “We need a Brian Cox for soil”

David Gardner made a fascinating contribution to the debate. He said that he changed his views of 20 years ago about the soil, noting that : “There’s a growing crisis, particularly in East Anglia, particularly due to black grass. I think farmers have woken up to the black grass problem but not to organic matter. I suspect catch cropping may have a role to play.”

Gardener urged more farmers to work with organisations like the Soil Association. He said: “I think conventional farming can learn a lot from organic farmers.” Later he told me : “The big thing that I think that organic farmers can offer to the world is that they can change the thinking”

The Oxford Farming Conference mainly had one message – which was pro-GM, underlined by comments from DEFRA Minister Liz Truss, and echoed inevitably by Lord Krebs. Truss incidentally turned down an invite to the alternative conference on grounds of a full diary.

“As far as I can see we won hands down. A tremendous atmosphere. The mindset over there (Oxford Farming Conference) is one that is really losing the plot. I think there’s a complete failure to engage”

It was Lord Krebs, crossing the road from Jesus College, where he is principal, who just had to take a dig at the organic world, claiming that if “we farmed entirely organically we’d have to increase the amount of land to produce the same amount of food”– and that, he said, did not add up to environmentally friendly farming.

At least as climate change advisor to the Government he was willing to have a little dig too at the last DEFRA Minister Owen Patterson. “2014 was the hottest year since records began , but I was told ‘never mention that when offering Owen Patterson advice’”.

The Real Farming Conference started in 2010 when the agricultural editor for The Archers, Graham Harvey, suggested that Colin Tudge and Ruth West – who had started the Campaign for Real Farming – should establish a new kind of farming conference. It was very much the minority event in those days. But things have moved on as Tudge said when this year’s conference closed: “As far as I can see we won hands down. A tremendous atmosphere. The mindset over there ( Oxford Farming Conference) is one that is really losing the plot. I think there’s a complete failure to engage”.