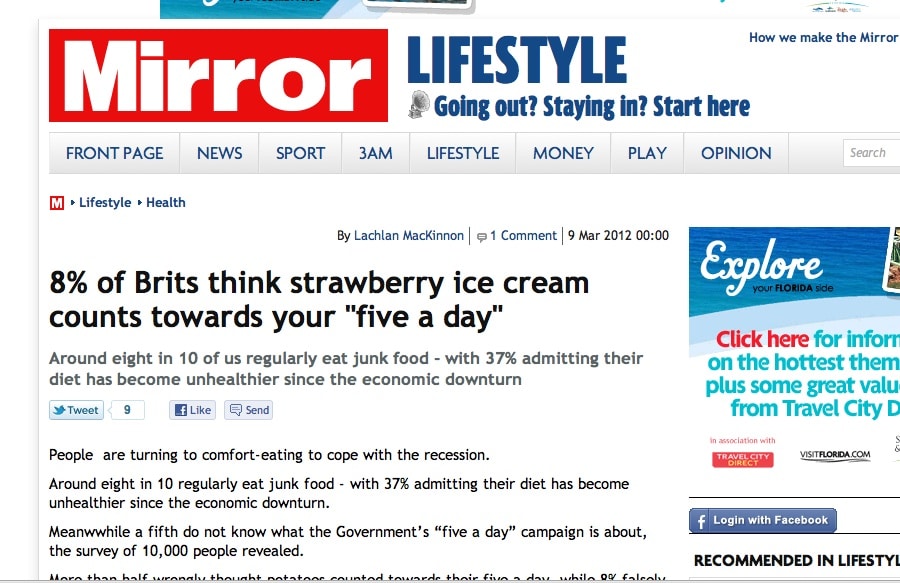 New research shows that over 30 million adults are not eating the recommended five portions of fruit and vegetables a day – almost an 8% increase from 2010 – led by almost 70% of 18-24 year olds.

Over 10,000 adults in the UKtook part in the latest and largest yet Health Food Manufacturers’ Association (HFMA) survey. Commissioned every two years, it analyses diet trends and found that over 37% of those surveyed feel their diets have worsened since the start of the economic downturn – 20% worse than in 2010 – particularly with those from the North East, London and Northern Ireland.

• Nearly a quarter of Britons are confused by vitamin guidelines

• Almost 50% of adults surveyed are deficient in vitamin D

Dr Marilyn Glenville PhD said: “The trends in this survey are extremely worrying and it is of utmost importance to public health that messages such as ‘five-a-day’ are seen to be working. Nutrition is so closely linked to good health and prevention of illness that we need to prioritise healthy food options – and unfortunately this survey does back-up the fact that most adults in the UK are either overweight or obese.

“In terms of supplements, these can never be a substitute for a healthy diet but we know that compared to the 1930s, fruit and vegetables can be depleted in minerals by an average of 20%, and that other foods like dairy have lost minerals, such as iron in milk by over 60%.  So even with the best will in the world, it is difficult today to get everything we need from food alone.”

The HFMA’s executive director, Graham Keen, added: “It is vital that as a nation we are responsible for our actions and managing diet is one of the keys for people to take ownership of their health. The public also needs access to straightforward, responsible information about how essential vitamins and minerals work – this could make a huge difference to the state of public health as well as prevalent issues such as the widespread vitamin D deficiency in this country.