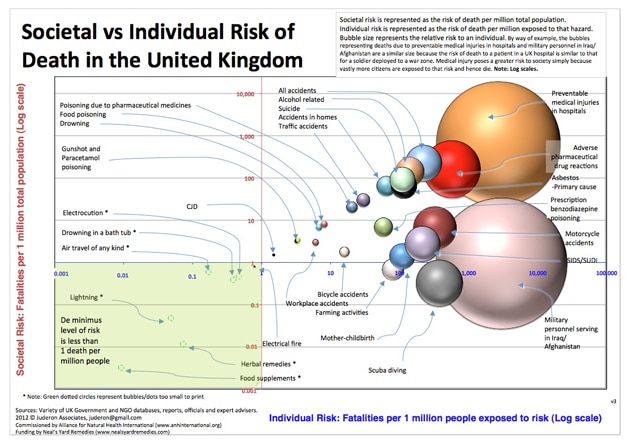 The Alliance for Natural Health International (ANH-Intl) has released figures showing that food supplements are the safest substances regularly consumed by UK citizens.

Both food supplements and herbal remedies are in the ‘supersafe’ category of individual risk – meaning risk of death from their consumption is less than 1 in 10 million.

ANH-Intl executive and scientific director, Robert Verkerk PhD, said the figures shed new light on the vexed question of natural healthcare’s safety: “These figures tell us not only what activities an individual is most or least likely to die from, but also what the relative risks of various activities are to society as a whole. It puts some real perspective on the actual risk of death posed by food supplements and herbal remedies at a time when governments are clamping down because they tell us they’re dangerous.”

Commenting on the UK data, Verkerk added, “When compared with the risk of taking food supplements, an individual is around 900 times more likely to die from food poisoning and nearly 300,000 times more likely to die from a preventable medical injury during a spell in a UK hospital. The latter is on a par with the risk of death from active military service in Iraq or Afghanistan.”

Although emphasizing that the figures relate to the risk of sudden death, ANH says they should “help to pressurise UK and European authorities to reduce regulatory burdens on natural health products”.

Verkerk added: “Governments justify the increasingly elaborate and restrictive new laws affecting natural health products on grounds of public safety. They argue that reducing consumer access to food supplements and herbal remedies, with the consequent negative impacts on small businesses manufacturing, distributing and selling such products, is in society’s interest. But the evidence is simply not there – where are the bodies?”