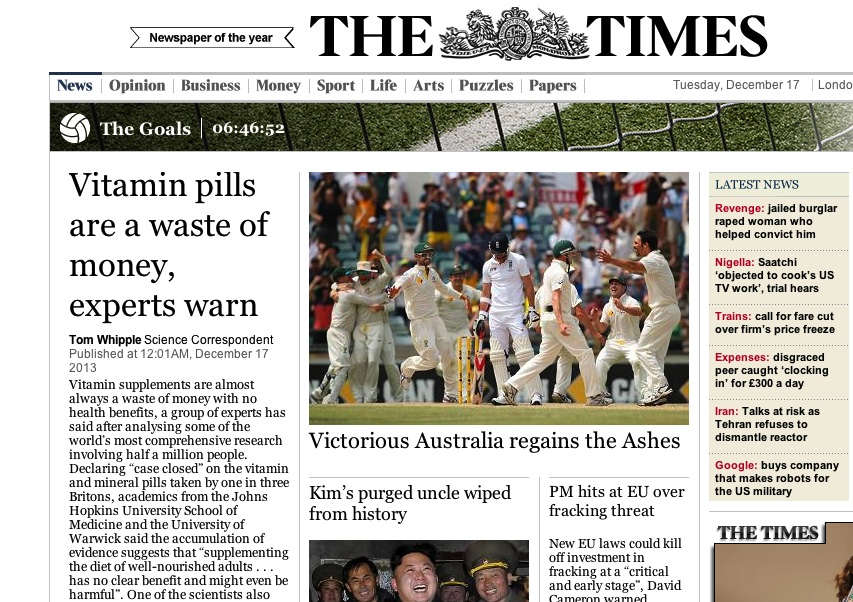 Researchers from Britain and America say vitamin supplements are a waste of money and have declared ‘case closed’ on the discussion about their benefits. But their conclusions have been challenged by industry and natural health experts.

The comments come in an editorial in the journal Annals of Internal Medicine, and coincide with publication of three large trials. One was a meta-analysis of 24 previous trials involving 450,000 people, which found no beneficial effect on mortality from taking vitamins. The second reviewed the progress of 6,000 elderly men and found no slowing of cognitive decline among those taking supplements. The third followed 1,700 men and women with heart problems for an average of just under five years, and saw no advantage in those who had been given supplements.

In a strident commentary, researchers from John Hopkins School of Medicine and the University of Warwick warn: “These vitamins should not be used for chronic disease prevention. Enough is enough. The truth is though we are in general overfed, our diet is completely adequate.”

The researchers claim that vitamin companies are deliberately stoking fears about health. Edgar Miller of John Hopkins University told The Times: “These companies are marketing products to us based on perceptions of deficiencies. They make us think our diet is unhealthy, and that they can help us make up for these deficiencies and stop chronic illnesses.”

But in an interview on BBC Radio 4’s PM programme, Graham Keen, executive director of the Health Food Manufacturers Association (HFMA) said constant comparisons between the US and UK industries were unhelpful. “The regulatory environment is completely different here in the EU. We’re governed and controlled by that , and we’re not allowed to make unqualified claims about our products. To be plain, food law in the UK does not allow companies effectively to lie to the consumer.”

Addressing the researchers’ claim that supplements are largely ineffective at preventing or treating disease, Keen added: “Food supplements play a vital role as adjuncts to a healthy diet but they are not to be regarded as being on a par with pharmaceuticals. They’re food products and we’ve never suggested our products are medicines.”

“Food supplements play a vital role as adjuncts to a healthy diet but they are not to be regarded as being on a par with pharmaceuticals. They’re food products and we’ve never suggested our products are medicines”

Keen also challenged the view that most Britons eat a healthy diet. “It’s misleading and slightly disingenuous to suggest that most consumers have a healthy diet and lifestyle. The Department of Health’s own studies show that a significant part of the population don’t achieve nutritional sufficiency. The same studies show that just 13% of men and 15% of women are meeting their 5-a-day target.

Leading natural health expert and author, Patrick Holford, claims the main study on which the researchers base their conclusions misuses the meta-analyis technique (of combining and contrasting different studies). He says: “Any intelligent person realises that meta-analyses that reduce all positive effects to zero are just not reflecting reality, which is the purpose of good scientific research.”