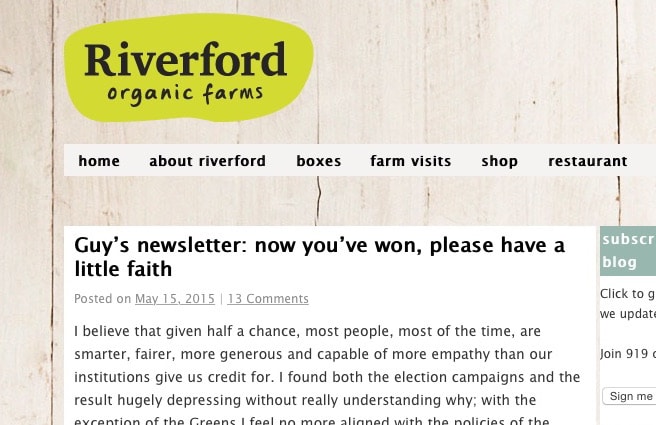 Riverford Organic founder Guy Watson has been accused of “mixing politics with potatoes’ after using his latest newsletter to attack both of Britain’s major parties for “appealing to personal greed”.

In a blog piece titled ‘Now you’ve won, please have a little faith’ Watson appeals to the new government to recognize that people are fundamentally emotional beings – “smarter, fairer, more generous and capable of more empathy than our institutions give us credit for”.

Reflecting on the “gloom” he felt at hearing the election result – though admitting to feeling “no more aligned to the policies of the losers rather winners; with the exception of the Greens”) – he writes: “I’m guessing that, as someone already personally rich, I will be richer under an unfettered Conservative government; but I don’t expect to be happier. What I find so depressing about modern post-Thatcherite Conservatism (and only marginally less so about post-Blairite Labour) is the apparent ubiquitous cynical belief that appealing to personal greed is the only way to get anything done.”

The response from Riverford customers has been mixed. Many are clearly supportive (including one Conservative-voting “recovering greed motivator”), but others are less impressed. Elswhere, The Times, which accuses Watson of “mixing politics with potatoes” quotes LSE professor, Charlie Becket. He tells the paper: “I’ll add organic veg boxes to my list of non-mainstream political communications platforms. There are channels for politics and veg boxes isn’t one of them.”

This isn’t the first time the activist entrepreneur has found himself under fire for his “commie rants”. While Watson has promised to focus his weekly musings on farm topics, he insists “trying to run a business responsibly is itself a political act”. He would probably add that the entire veg box movement is a political act.