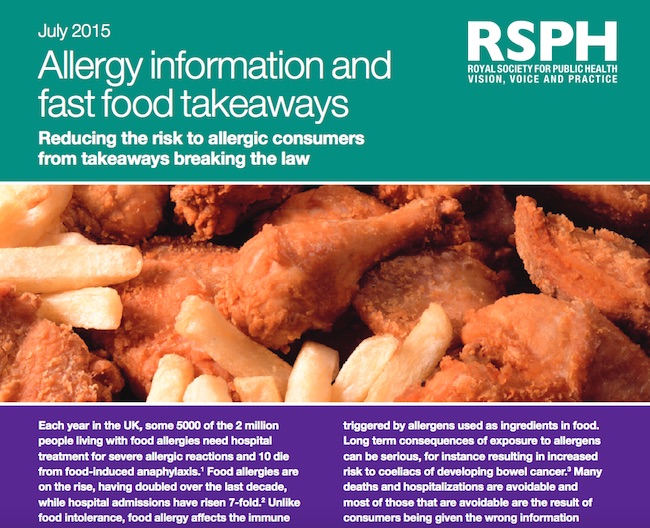 Six months after food allergy laws were enforced for restaurants and takeaways, the Royal Society for Public Health conducted a mystery dining investigation to find out to what extent these new rules were being adhered to.

In each takeaway, RSPH researcher asked three key questions: could they say whether three of the major allergens were in the meal?; did they appear to have a record of allergens to make sure the information they gave was accurate, could be checked, and the same information would be given each time?; and was it clear how a customer could get hold of this information?

The survey found that 70% of takeaways were not providing information in the right way and over half (54%) didn’t know whether one of the major allergens was in their food. Worryingly, four in five (80%) did not appear to have system in place to ensure the information they were providing was accurate and verifiable, with nine in ten unable to evidence this when requested.

Takeaways mainly serving fried chicken performed the worst: none of the outlets appeared to have a record of major allergens in their dishes or a notice to tell customer where to get information, and four in five (80%) could not tell the researchers whether one of the major allergens was in a meal.

The worst offenders at not knowing if a major allergen was in a meal were fish and chip takeaways (86%), fried chicken and Chinese (83%), and sushi (67%).

In the wake of the findings, Shirley Cramer CBE, chief executive, Royal Society for Public Health, said: “Five thousand of the two million people suffering from allergies in the UK need hospital treatment every year, which makes the results of our research into takeaway allergen compliance even more alarming. The consequences of an allergic reaction can be serious and in ten cases per year, deadly. Over two-thirds (70%) of takeaways we visited were not providing allergen information in the correct way. It’s extremely worrying to see such a vast number of takeaways not complying with laws put in place to protect the public.”

Michelle Berriedale-Johnson, director of the FreeFrom Awards and editor of the FreeFrom Matters sites, comments: “Sadly, we were not at all surprised by the findings of the RSPH’s survey. Takeaways have always presented the greatest danger to allergic people because they are usually small, independent outlets who are the least likely to have even heard that regulations are in place, let alone what they are or how to follow them.

“And because of the pressure on local Trading Standards and Environmental health agencies, allergen ‘policing’ is likely to be spasmodic if it happens at all. However, there are exceptions to every rule (like the wonderful Olley’s in Herne Hill that appeared on the 6 o’clock news!) and we are hoping that a number of them will be entering the Street food and Takeaways category of the FreeFrom Eating Out Awards – all helping to raise allergen awareness right across the food service spectrum.”

Cramer adds: “It is hugely important the appropriate agencies work with takeaway owners and staff to provide the training and resources to enable them to give the correct and proper allergen information to consumers. We have proposed a number of measures to improve the current situation such as; the Food Standards Agency to link food hygiene ratings with allergen management, food delivery platforms such a  Just Eat and Hungry House to request allergen information before signing takeaways up and for takeaways to review their allergen plan to make sure they’re not in breach of the law.”

The RSPH has issued a call to action in its position paper published this month. It calls on: