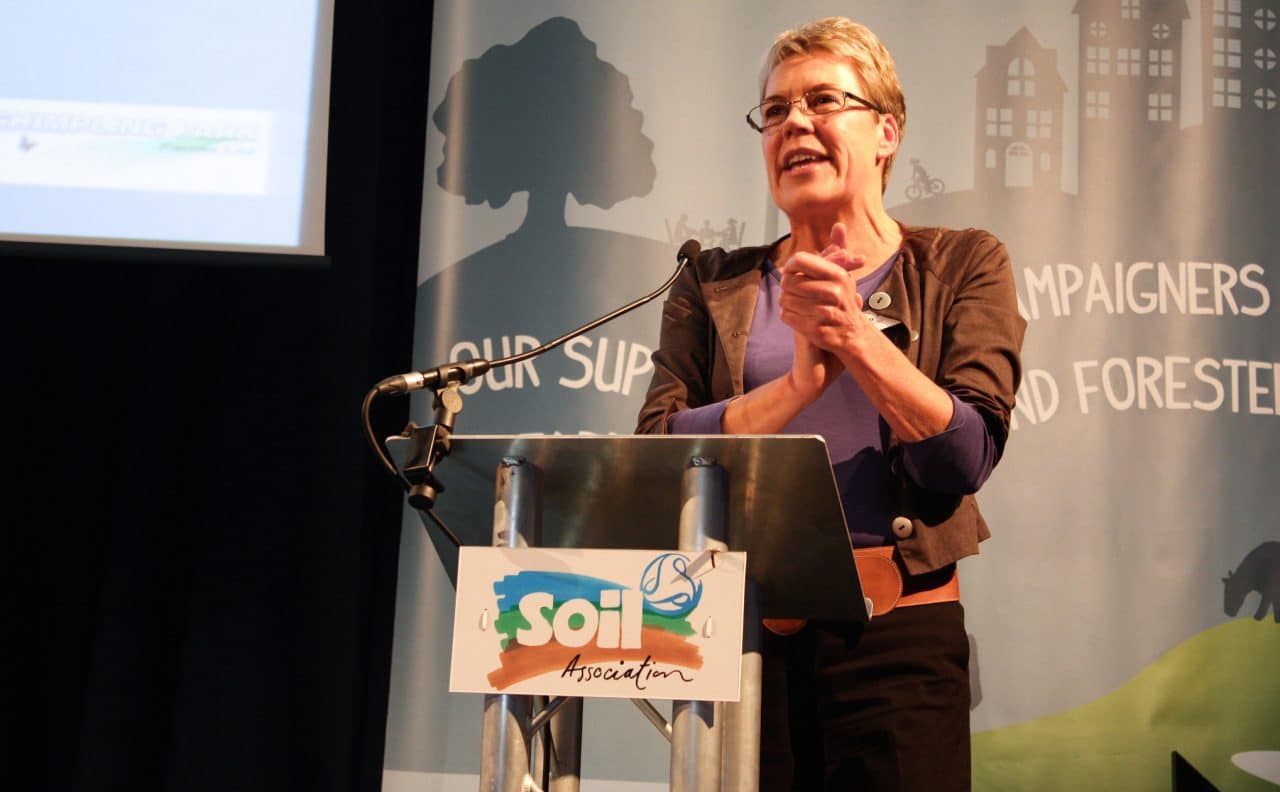 Soil Association chief executive Helen Browning opened this year’s Conference in optimistic mood. “It’s a great time to be coming together. The organic market is moving in the right direction,” she told delegates.

Browning said that organic sales had increased by just over 3% in the past 12 weeks compared with a 2% drop in non organic sales., and added : “I think it’s all been helped by nutritional information, and a good harvest. I think we’ve made some real progress at the moment.

Browning outlined three drivers behind the organic market’s revived fortunes and a revitalisation of British food culture. One, she said, was the success of the Soil Association’s Catering Mark. This had been “an astonishing success” over the past year. “DEFRA, the fire brigades are all using the Catering Mark. At their recent Summit Conference recently 1,000 police officers were eating Catering Mark meals.”

A second contributor was the success at school level of the Food For Life initiative, and a third was the Duchy Originals Future Farming programme . “Over 3,300 farmers have been involved in the scheme. A scheme in which farmers become part of research.,” It was a scheme, Browning added, that was also about involving non organic farmers as well. “Some people have been really critical about that. We must work with others. It’s a very big theme of what we are doing.”.

In terms of its direct impact on retail sales Browning singled out newly published nutritional data – most notably the work published in early 2014 by Newcastle University – as the key driver.

It’s time for organic to use sewage sludge – Leifert

One of the most hotly anticipated speakers at this year’s Conference was Professor Carlo Leifert, lead author of the 2014 Newcastle University study showing that organic food contains up to 69% more antioxidants than conventional.

Leifert’s topic for the Conference was that prickly question: Can Organic Food Feed The World? Before his talk I was able to ask him about his report – and the controversy it caused. “To me it wasn’t a surprise,” he replied: “The nutritional community don’t understand the agronomy of organics, let alone conventional farming. I’ve had lots of letters of appreciation from nutritionists, even someone from the University of Kentucky. From a professor saying that I had convinced him and that before he was a sceptic”.

In his talk Leifert gave a warning about the speed at which conventional agriculture is using up phosphate reserves. “For the last 50 years industrial farming has been relying on phosphate mined in North Africa in ever-increasing quantities, while using this scarce resource less and less efficiently. Scarcity of phosphates are driving up the price, and sooner or later, as we inevitably start to run out of phosphates, non-organic yields will start a dramatic decline.

Organic farming would also face problems, although not on the same scale. Courting controversy again, he said that the solution would be for organic farmers to use human sewage as fertiliser. Use of human sewage in organic farming is currently prohibited. But Leifert’s view is that that is enormously wasteful, and probably untenable.

The Soil Association is to be re-branded in the New Year it was revealed at the Association’s annual meeting in Swindon.

A brand new logo appeared on slogans draped each side of the stage of the Steam Museum venue.

The organic charity’s chief executive, Helen Browning, explained to e the thinking behind the changes. “It’s really about recognising the need to re-fresh ourselves making sure we tell internally and externally.”

She added: “We talked to our staff about who we are and what we’re trying to do. We’re just trying to express ourselves a little bit more. I think for us it is going back to our roots – and reflect why we’re called the Soil Association. So many people have come up to me in the past months and said ‘ why aren’t we changing our name’? But to me the soil is at the source of our well-being. Soil Association is no bad title explaining it to a broader audience.”

“We’re just trying to express ourselves a little bit more. I think for us it is going back to our roots – and reflect why we’re called the Soil Association”

It is this broader audience that Browning thinks to whom the Soil Association is now appealing and involving itself, as she underlines the work being done with schools, and non-organic farmers. “I think we have the contact points. A lot of people are in gardening and growing. Next year our farm walks programme will be open to non-members.”

As for the re-branding, this will extend well beyond the new logo, encompassing all aspects of the way the organisation presents itself and how it communicates with the public and all stakeholders, Browning says.