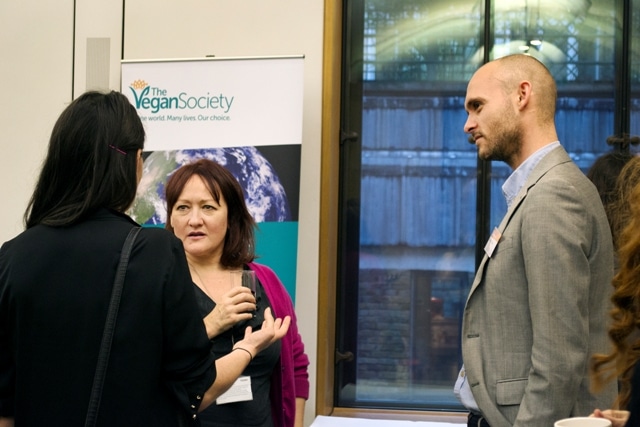 In November, during World Vegan Month, The Vegan Society hosted a Parliamentary reception to celebrate 25 years of the Vegan Trademark.

And vegan business is booming, as MPs, researchers and advisers as well as Vegan Trademark holders heard of the rapid growth of the market

On the day Christina Rees MP, who sponsored the event, said: “Now is the time to support and invest in vegan business, the growth of which is better for our health and the future of our planet.

“This is also a huge opportunity for our economy. The vegan market is experiencing exponential growth, much of it through UK-based manufacturers including successful start-ups and thriving small-to-medium sized enterprises. This ought to be encouraged through initiatives and policy, which will also improve public health and tackle climate change.

“Vegan food is also one of the most inclusive diets, suitable for almost anyone including those with food intolerances or allergies, regardless of religious belief. It is abundantly clear that vegan business can benefit us all.”

Leading figures in the industry shared their success stories, with Alpro’s Sue Garfitt detailing the company’s meteoric rise in the non-dairy sector, announcing growth of 28% year-on-year.

Lush’s Hilary Jones paid tribute to the Vegan Trademark as integral to Lush’s business, while also emphasising the value of the under-acknowledged  “vegan pound”.

Jasmijn de Boo, CEO of The Vegan Society, said: “This was another significant World Vegan Month event. The fantastic response from MPs and their staff gives us great encouragement that the vegan message is being received and that we are making progress with our campaigning and lobbying work. The excellent turnout was further indication that veganism is being taken seriously and discussed more frequently at a policy level.”

The Vegan Society says that according to the latest Mintel figures, the number of vegans in the UK is likely to have at least doubled in the past nine years, and around 12% of British adults now follow a vegan or vegetarian diet. Consumer trends also clearly illustrate this growth with 34% of the country purchasing meat-free products and the non-dairy milk market growing by 155% between 2011 and 2013, with the rate for 2015 expected to be even higher.

De Boo added: “It’s clear vegan products are in high demand. Given their health and environmental benefits and, of course, what they do for animals, we are calling for more support and encouragement to be given to vegan businesses in the UK.”