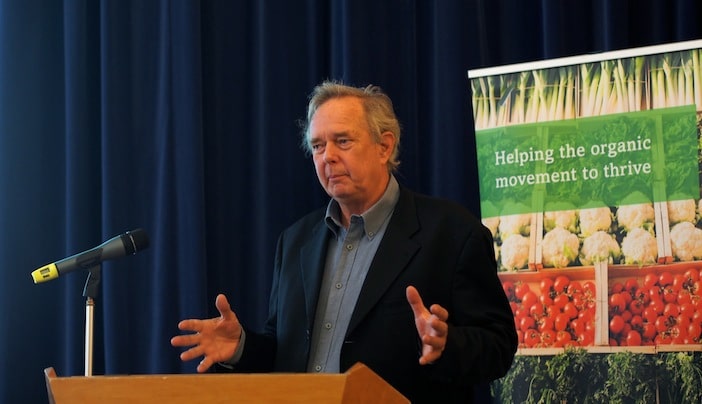 The Soil Association yesterday (19 September) unveiled a comprehensive set of evidence-based statements about the benefits of organic food and farming.

The statements are contained in a new report – What You Can Say When You Are Selling Organic Food – from the organic charity and have all been cleared with the Advertising Standards Authority’s (ASA) Copy Advice Team.

The Soil Association says the statements, available to anyone selling organic products, will help demonstrate the broad range of positive benefits of organic food and farming and why shoppers should choose organic.

Speaking about the new statements at the Soil Association’s Annual Trade Briefing, policy director, Peter Melchett (pictured), said: “For the first time we now have an unprecedented range of rigorously researched statements which have the ASA’s Copy Advice team’s backing.

“We’ve worked hard to develop our evidence base, some of which is supported by government data. For example it’s great to be able to say with confidence that ‘The UK government has said that organic farming is better for wildlife, causes lower pollution from sprays, produces less carbon dioxide and fewer dangerous wastes’.”

Talking earlier to Natural Products, Melchett said that the newly agreed statements were a breakthrough for the organic sector. “We’ve put a lot of effort into this over the years, including holding meetings with Chris Smith, chair of the ASA, and senior MAFF officials, and generally ensuring that our points, and the evidence that support them, are very clearly communicated.

“It’s true that we had been concerned with some of the decisions in the past  but we’ve had a good period of constructive talks.”

Melchett says that the importance of the newly agreed statements is not about single messages. “It’s more about emphasizing the wide range of benefits that organic offers. Marketers are always asking ‘what’s the killer blow?’ With organic everything is the killer blow. I think we need to communicate that.”

Melchett says it is time to begin “a more detailed conversation” about organic. “We’re in a strange situation where we’ve seen the supermarkets and big food brands copy the marketing techniques of the early organic food pioneers – which were typically very conversational. What went wrong was when organic started copying the supermarkets!” That, he says, sometimes led to oversimplified messages that denied the complexity of organic systems. “I don’t think we need to follow the crowd – we can treat people more intelligently.”

The new Soil Association report is being published at the same time as new data from Nielsen – also announced at the trade briefing – showing that the organic sector continues to grow at a rate of around 1% over a 12 week period to 17 August 2013.

Rob Sexton, chief executive of Soil Association Certification Ltd, said: “I’m delighted to share this report with our licensees. With the market in recovery, the Soil Association believes this is a crucial moment for everyone in the organic movement to come together with a clear call to consumers – organic is food you can trust, better for the environment and animal welfare.”

Sexton said that the performance of Soil Association licensees was even more encouraging, with year on year growth of 3.4%. Over the past three months that had risen to 7.3%, representing “levels of growth not seen since 2008”.

“… the performance of Soil Association licensees was even more encouraging, with year on year growth of 3.4%. Over the past three months that had risen to 7.3%, representing “levels of growth not seen since 2008”

Commenting, Peter Melchett says “it’s a good time to remind the major multiples in particular about the many positive statements  we can use about organic without concern”.

“Many core organic businesses held steady in the downturn. Riverford, Ocado, Planet Organic – they all did bloody well. But we had to accept that overall organic sales were down because the major multiples pulled organic lines and lost sales. And, yes, that felt unfair. We undoubtedly went down too far. Which is why it feels great now to be coming up strongly and reinvigorated. We’re actually feeling pretty buoyant about the future for organic.

What you can say about selling organic food

In its report the Soil Association groups permitted statements about organic under specific headings – a selection appears below (click here for the full list).

Even if you are using these CAP-cleared statements, the Soil Association’s advice to organic companies is always to seek advice from CAP’s Copy Advice Team on an ad (the complete artwork, not just text, as images and other elements can be seen to affect meaning). Advice is free and is usually given within 24 hours.

Reasons to choose organic
• GM ingredients, hydrogenated fats and controversial artificial food colours and preservatives including the preservative sodium benzoate, aspartame and food colour tartrazine are banned under organic standards.
• One way to reduce your exposure to pesticides is to eat more organic food.
•Nanotechnology is banned under Soil Association organic standards.
• Many pesticides remain in some of the food we eat, despite washing and cooking.
• Soil Association standards ban the routine use of antibiotics.
• Avoiding chemicals in food is the biggest motivation for purchase with organic shoppers.

Animal welfare
• No other international farming standards deliver higher standards of animal welfare than organic.
• High animal welfare.
• Animals are raised in conditions that suit their natural behaviour and are fed a mainly organic diet.