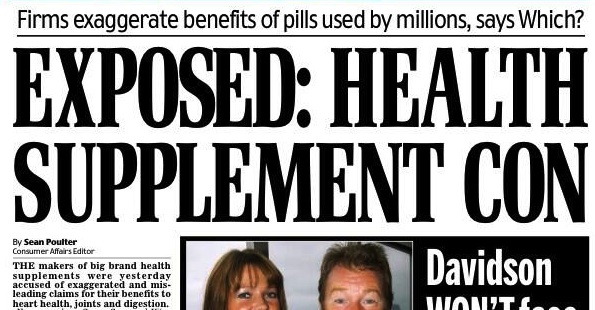 The consumer group Which? claims that some food supplement manufacturers are breaking new EU rules on health claims.

Which? says that while most companies have removed health claims rejected by the EU under the Nutrition and Health Claims Regulation (NHCR) “a small number are still using ambiguous product packaging to promote their products.”

The consumer group says it assessed a range of popular supplements and the claims they made on their packaging to see how they compared with what is allowed. It points out that since December 2012 it has been illegal to include health claims on packaging that are not approved by the EU – one exception being certain probiotic strains and glucosamine, which must be removed by January 2014.

A third of consumers (33%) told Which? researchers that they take food supplements regularly. Of these, some of the most popular supplements included glucosamine and chondroitin. All health claims for these supplements have been formally rejected by the EU.

Which? names several products from leading brands that it says make unproven claims on packaging and websites. It cites six other food supplement products that it says “could confuse consumers with their exaggerated and ambiguous claims”. Describing some of the techniques uses by brands, Which? says: “Some have used larger font sizes and all have taken advantage of additional ingredients (such as vitamin C and/or calcium) that do have proven health claims, to imply the health benefits of all the ingredients.”

Which? executive director Richard Lloyd said: “It’s worrying that some manufacturers aren’t playing fair on the packaging of food supplements, making claims which could leave shoppers out of pocket. Which? campaigned for health claims on these products to be backed up by scientific evidence, so it’s disappointing that manufacturers are still using clever language to imply unproven benefits.

“Consumers deserve accurate information to base their spending decisions on, particularly in the current economic climate. We would like to see all ambiguous and exaggerated claims completely removed from all food supplement packaging, so consumers can feel confident they are getting a fair deal.”

But the Health Food Manufacturers Association says Which? has got its facts wrong. Speaking to the Daily Mail, HFMA executive director, Graham Keen, said: “This new report is inaccurate as it infers that manufacturers are misleading their customers – which is simply not true.

“Just because a certain ingredient does not have an EFSA-approved claim, does not mean that it doesn’t have a beneficial effect. The huge quantity of claims that have been rejected is largely a result of EFSA applying an inappropriate pharmaceutical-style assessment to generic health maintenance claims on food ingredients, an approach usually used for assessing illness-related claims on drugs which are obviously completely different.”

Adding his comments, Chris Whitehouse, director of strategy at Consumers for Health Choice, said: “Which? are highlighting the disproportionate and overly burdensome regulations imposed on the specialist health food sector by the Nutrition and Health Claims Regulation. CHC will be stepping up its efforts to provide accurate information to consumers about the benefits of vitamin, mineral, botanical and other food supplements so that they can continue to make informed choices about the products that they choose and the benefits that they can reasonably expect to achieve by doing so.

“Now, more than ever, consumers will be turning to CHC as a trusted, impartial third party source of information and advice.”