By making a stand for health choice and acting as local health information hubs, stores become community assets valued by cash-strapped councils and health authorities as much as consumers. Other retailers are showing what they stand for by being local advocates for ethical sourcing, Fairtrade and animal welfare, or acting as local hubs in the movement for a better food system.

At this month’s Natural & Organic Products Europe three retailers shared their very different – but equally inspiring stories – of ‘being more than a shop’.

Sara Novakovic of Oliver’s in Kew in west London said that getting involved in issues – from organic, GM and localism to corporate greenwashing – had helped define her store and give it a distinctive offer over competitors like new near-neighbour Whole Foods Market.

Asked to describe Oliver’s ethos in sentence, Novakovic didn’t hesitate: “Clean food from small suppliers, great ingredients, no bullshit”. She describes Oliver’s as “a grocer where you can do a full shop and buy everything from fresh organic produce to whisky”. The store has a strong food accent, she said, adding “we’re quite fine food, quite deli – but then no one is going to eat health food that tastes rubbish, although if you are on an exclusion diet some things are going too taste different”.

Novakovic said Oliver’s – now 24 years old – had always been engaged with health and environment issues. “We were involved before it was sexy or trendy. We’ve always sourced ethically, for example, although I’ve never used the word – and in fact I don’t like it. Despite me being vegan for a number of years, I really wanted to a woman in high heels and designer coat to be able to come into the store and feel comfortable in it.”

“We were involved before it was sexy or trendy. We’ve always sourced ethically, for example, although I’ve never used the word – and in fact I don’t like it”

But when, a few years ago, Navokovic got involved in a scheme to make Kew a plastic bag free zone she had a conversation with the campaign organiser which would change her view on campaigning. “She was probably about 35, and she had no idea what we were about. I said to her, we do this, and we do that too – and she said, well, you really should be telling people about it. And I thought, right, that’s exactly what we will do.”

Novalovic told the seminar audience that getting involved with issues and campaigns haf made her a more knowledgeable retailer – and person. “Just last week I attended the FSA’s consultation on unpasteurized milk, and I thought, actually, I know quite about this”.

When Whole Foods Market announced it was to open in nearby Richmond, Novakovic worried that the US retail giant might put her put of business. In fact, Oliver’s has been busier since Whole Foods has opened, something that Novakovic puts down partly to her store’s very distinctive values. She commented: “There are some foods that we both do. But the foods that I do and they don’t are better quality and the food they do and we don’t, well, I wouldn’t stock them anyway! I’m not knocking Whole Foods at all, they are a gateway store. And having a big competitor like that has helped us define ourselves.”

Dominic Upton has run Haslemere Health for 20 years. He has a background in homeopathy and herbal medicine and said that he had initially approached retailing from “more of a medicinal side of things” – although he also had a strong interest in natural food: “I was raised as vegetarian and I’ve remained one, and vaccination free too.” 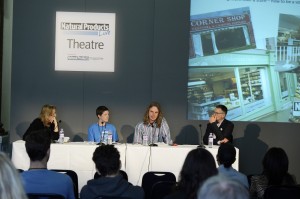 “A lot of these things were once seen as being fairly fringe activities, but I think we’re seeing them move into the mainstream. An important part of what we try to do is to open up some of these ideas and approaches to life to a wider part of the community. I think we’re seeing some recognition on the part of the Government that the NHS is struggling and that it is not sustainable in its present form,and we’re seeing government beginning to introduce some helpful initiatives, albeit rather quietly. So, the question I would ask – and it’s part of the theme here today – is how can we, as health food retailers, participate in this, and get access to some of the health funding being devolved to local health authorities and councils?”

Asked to sum up Haslemere Health’s approach to ‘being more than a shop’, Upton said: “I think it’s about making a stand for health choice and acting as local health information hub – both in the store, but also with our festival shop. The reality is that so many people are still at square one when it comes to looking after their health ad wellbeing. I’d like to be able to offer a space for really anyone to come and speak in, or find out more about these issues – maybe creating a forum like this, or getting in people from a local GP practice because we do have our supporters in local practice. There is just so much that we can do – and such a big opportunity to be seized.”

Ruth Strange explained how she came to set up wholefood co-op Sound Bites in Derby: “I moved to Derby where there weren’t any independent wholefood stores, only Holland & Barrett who seemed to be becoming more about powders. So we set up Sound Bites. It’s very much about being organic, Fairtrade, using low level packaging, cruelty-free.

“And now, with the Wholefood Shop Action Network (WSAN), we’re trying to take the aims of the shop further and wider. It’s about increasing access to ethical food and supporting positive social change and creating a forum where retailers can share their experiences and help build a wider resource for all out customers.”

Had any of the three retailers received any negative reaction to their stance on issue and campaigning. Novokavic had: “Yes. Vaccination. I had a woman scream down the phone that she loved the store but completely opposed our position on vaccination. You’ve probably got to accept that sometimes might happen.”