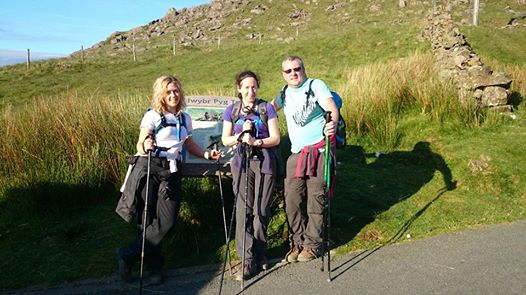 On 14 June a team from Peak Health Food in Rugeley completed the Three Peaks Challenge for charity, with Jason Parrish, Emma Mayou and Carey Dyer climbing Ben Nevis, Scafell Pike and Snowdon in 23 hours and 41 minutes.

Marie Longman, manager at the store, explains the idea behind the initiative: “At the beginning of the year, my partner Jason announced that he wanted to do the Three Peaks challenge this summer. I mentioned this to Emma, our longstanding employee, and being an avid fitness fanatic she said she quite fancied doing it herself and would also mention it to her colleague Carey.”

The team did a trial of Snowdon the weekend after Easter, completing it in four hours 20 minutes and then started training in earnest.

“Jason then decided that we should turn it into a charity event, with each team member choosing a favourite charity. Using Facebook and the industry forums, we put out an appeal to suppliers for donations of stock for us to be able to make a series of hampers to be raffled off and also a prize tombola,” says Longman.

The three charities chosen by the team are Air Ambulance, Action Medical Research for Children, The Extra Guest, Food For All.

The fundraising is continuing, but so far the team has amassed over £200 in-store and £250 online, with private donations of about £120 still to be added.