With more and more people eating increasingly plant-based diets, it is often said that the UK needs animal agriculture to provide enough food for everyone. This has now been disproved by scientific research which shows we would still be able to produce enough protein and calories without the need to farm animals.

A brand new study from Harvard University found that the UK would be able to sustain itself by returning a portion of land used for animal agriculture back to forest. It found that converting land currently used for grazing and growing animal feed crops to forest could soak up 12 years of carbon emissions.

Speaking at the first of its kind Grow Green Conference – which was all about plant agriculture – British lead author Dr Helen Harwatt warned the UK is far from having a Paris Agreement-compliant food system. The legally binding agreement sets out a global action plan to get the world on track for avoiding dangerous climate change by limiting global warming to well below 2°C.

Researchers modelled a scenario where pasture land is returned back to forest and the areas used for growing animal feed are converted to grow health-promoting crops for human consumption. They found this could make a fair national contribution to tackling the climate crisis, as well as provide enough protein and calories for the British population.

Animal agriculture is an inefficient way of producing food, as for every 100 calories we feed to animals, we receive only 12 calories back by consuming their flesh and milk. Almost half of all land in the UK is currently used for farming animals, providing very little nutrition compared to the resource inputs involved. 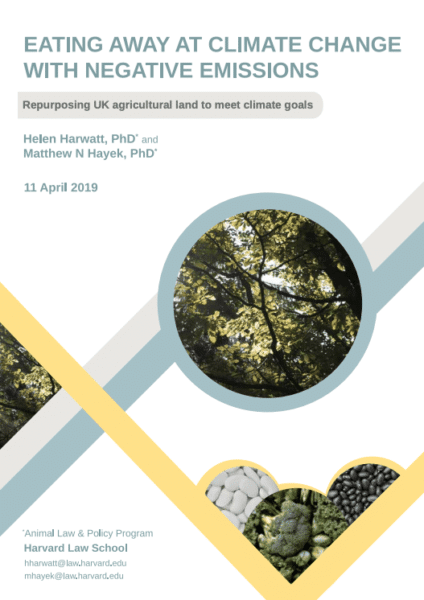 The UK imports a staggering 90% of its fruit and vegetables and we currently grow 50% of what we eat nationwide. Beans and other pulses are very efficient crops to grow in Britain – as they have nutritional and environmental benefits – and could be grown in place of animal feed, in addition to a range of fruit and vegetables.

Meeting the Paris Agreement also requires carbon dioxide (CO2) removal from the atmosphere, which the researchers found we can ‘eat our way to’ by returning pasture and animal feed crop land back to forest.

The report details unique findings from two scenarios. The first maximizes CO2 removal by returning pasture land and cropland used to grow animal feed back to forest. This removes the same amount of CO2 as 12 years of the UK’s current emissions.

The second scenario trades off some of the CO2 removal and keeps croplands in production, to allow for an increased and diversified supply of fruits, vegetables, nuts, seeds, grains and pulses to the UK population. This removes CO2 equal to nine years of the UK’s current emissions.

There is no ‘business as usual’ for any industry anymore

Scenario two maximizes the opportunity to produce more fruits, vegetables and pulses, to help meet changing consumer demands for more plant-based foods, and help address the mass under-consumption of the five-a-day fruit and vegetables recommendation. The UK would be self-sufficient under this scenario.

The new habitats would also create opportunities to tackle the wildlife crisis by reintroducing beavers, turtle doves and lynx.

These suggestions would of course need to be supported by the Government but are nevertheless a fascinating insight into what we can do as a country to help combat climate change.

The report’s co-authors, Dr Harwatt and Dr Hayek, emphasized that there is a need for a radical action far beyond that which is currently planned, in order to reduce emissions steeply and rapidly. There is no ‘business as usual’ for any industry anymore.

For a copy of the full report, please see http://animal.law.harvard.edu/publications/.