Today, consumers have access to a dizzying array of plant-based milk alternatives. Their profiles can vary a lot, so it’s handy for retailers to have some knowledge of nutrition to help their customers make the best choices.

If someone drinks at least a couple of glasses of plant milk daily, it can provide a useful amount of protein. However, this totally depends on the type of product consumed.

Soya milk is a particularly good choice for young, athletic and older vegans who have relatively high protein requirements. It contains almost the same amount of protein as cows’ milk. Furthermore, the quality of soya protein is similar to that of meat and dairy protein.

Non-soya varieties of plant milk tend to contain much lower amounts of protein. You can compensate by getting more protein elsewhere. Beans, lentils, peas, cashew nuts and peanut butter are just a few examples of plant foods that provide good quality protein.

From a nutrition perspective, one of the most valuable features of plant milks is that many are fortified with the same amount of calcium as cows’ milk. This makes it easy for people to maintain their calcium intakes when they ditch dairy. The UK’s Eatwell Guide recognizes that fortified plant-based alternatives are rich sources of this nutrient. For example, consuming two glasses (400ml) of fortified plant milk meets about two thirds of the daily calcium target set for adults.

If you’re talking to consumers about organic plant milk, bear in mind that it doesn’t tend to be fortified, although there are products on the market containing seaweed-derived calcium. If someone uses homemade or unfortified plant milk on a regular basis, they need to consider where they’re getting their calcium carefully. It’s recommended that everyone eats at least two portions of calcium-rich foods daily. Here are plant-based examples of one portion:

A supplement can be used as a top-up if fortified foods and calcium-set tofu are off the menu.

Vegans, and other people who avoid dairy, need to ensure that their diets contain a reliable source of iodine. Arguably, non-seaweed supplementation is the best option, and this approach is particularly recommended during pregnancy, breastfeeding and childhood.

If someone isn’t keen on using an iodine supplement, there are now a few iodine-fortified plant milks on the market. Alternatively, one and a half to two sheets (4g) of nori might provide the recommended daily intake. Some people use iodized salt but it isn’t ideal to rely on salt as a source of nutrition due to the link with high blood pressure.

Unsweetened products are the most tooth-friendly options, particularly if plant milk is consumed between meals. Bear in mind that it can take a few weeks to adjust to the taste if you’re used to drinking cows’ milk or sweetened plant milk.

If you’d like to learn more about vegan nutrition, check out the resources at vegansociety.com/nutrition, including the free VNutrition app.

Dietician, The Vegan Society
Heather Russell is a trained dietician. Having left the NHS where she worked from 2010 to 2016 (specialising in diabetes from 2013 onwards) Russell now applies her dietetic skills to supporting the work of The Vegan Society. 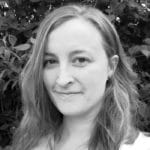