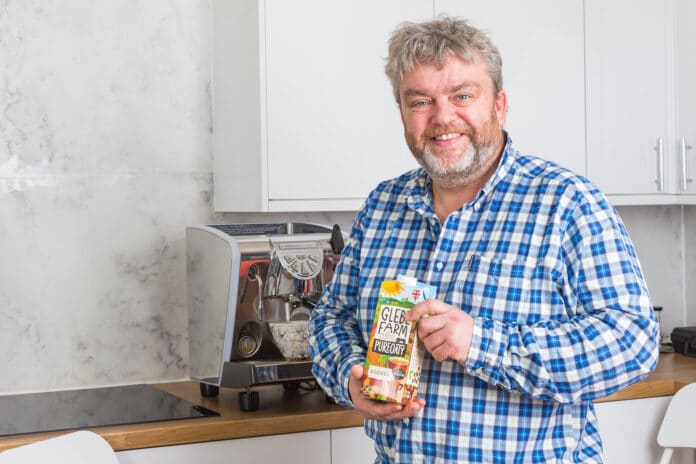 Family-owned British oat milk producer Glebe Farm is showcasing a revamped look for its products and has introduced a new PureOaty variant.

The rebrand comes after the producer won a court case brought by Oatly which claimed the name and packaging of PureOaty was too similar to its own and infringed on its trademark. The Swedish oat drink giant also accused Glebe Farm of ‘passing off’ its products as Oatly’s.

Co-founder Phillip Rayner (pictured) says although the court case brought against it was baseless, it did indirectly lead to the rebrand. “During that time … we asked our loyal customers about our brand and realized that there was a real opportunity to accentuate some key factors that make us unique and special in the oat drink market – not only from Oatly, but from a whole market that is dominated by foreign imports.

we’re an independent, British Family Farm, proud to be growing our own pure, gluten-free oats and making oat milk

“First and foremost, we’re an independent, British Family Farm, proud to be growing our own pure, gluten-free oats and making oat milk right here in Cambridgeshire. We believe our new fresh packaging for 2022 showcases just that, reflecting our brand ethos and values, even from a quick glance on a shelf.” 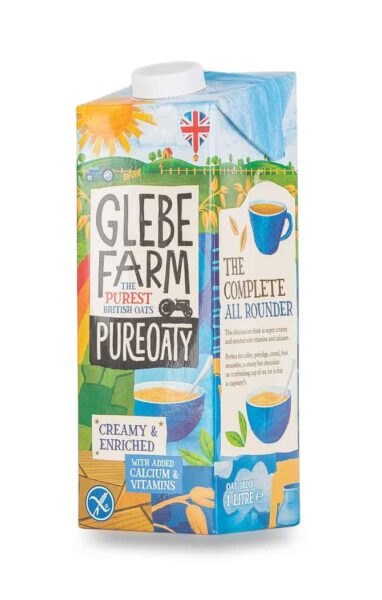 To highlight Glebe Farm’s sustainability credentials – including utilizing renewable energy and having ‘rock bottom food miles’ – a QR code has been added to the packaging to drive consumers to the brand’s independently conducted sustainability report on its website.

New Glebe Farm PureOaty Creamy & Enriched drink is fortified with calcium and vitamins D, B2 and B12, and joins the brand’s PureOaty Barista. Commenting on the new product, Rayner says: “It was produced predominantly based on customer demand – as people wanted a slightly creamier version that would be ideal to drink on its own as a milk substitute as well as being ideal for smoothies and with cereal/porridge to start your day off well in a nutritious way.”