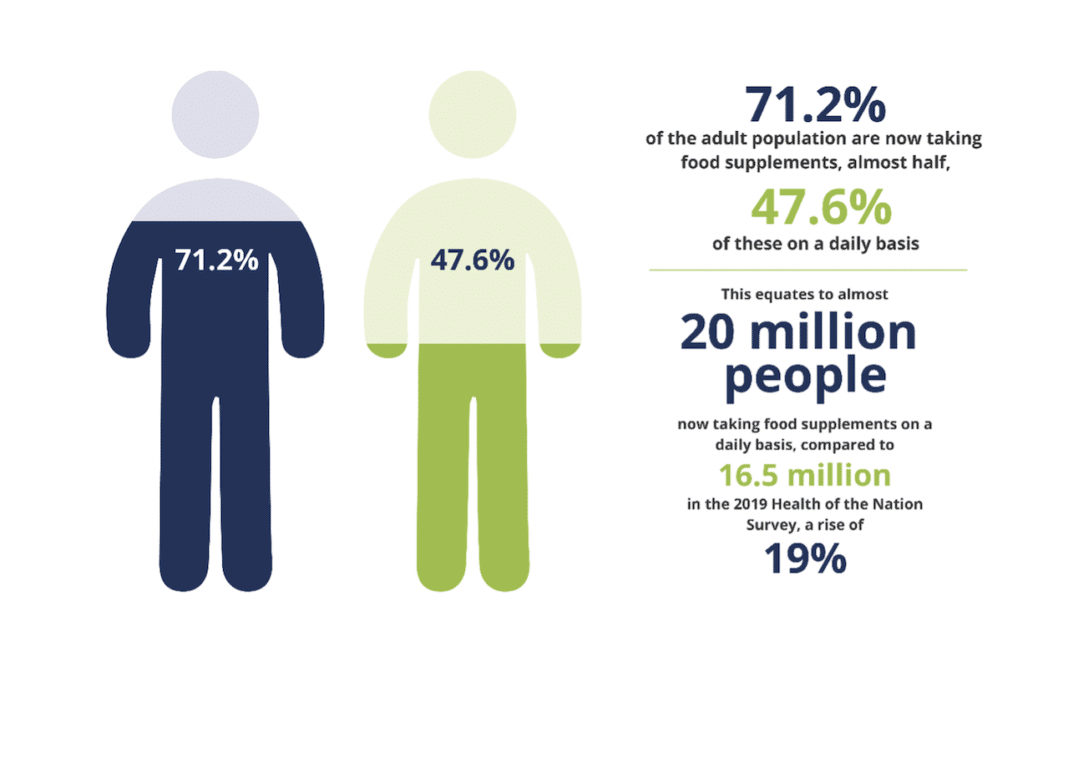 Data from a new survey, Health of the Nation 2021; Lockdown Focus, commissioned by the Health Food Manufacturers’ Association (HFMA) reveals a 19% increase in supplements users in the UK.

The survey – conducted by 3gem – included over 10,000 adult participants in the UK and covered a ‘comprehensive gender, geographical and age representation’, according to the HFMA.

The data shows that the number of daily UK supplements users now sits at almost 20 million – up 19% since the last survey in 2019, when the figure sat at 16.5 million. Over 71% of adults are taking food supplements with one in three claiming that the pandemic was the catalyst. Among the new users, vitamin D crowned the list of ‘most common dietary addition’ at 63%, followed by vitamin C at 39%.

The research also demonstrates a higher uptake among 18-24-year-olds, with 77% now consuming some sort of supplement. Within England, London leads the way at 58%; in the wider national landscape, Wales tops the list at 56%, followed by Scotland at 49% and both England and Northern Ireland at 47%. Overall, more women are supplementing (51%) than men (44.5%).

Among the reasons stated by respondents for why they are now engaging with the VMS sector, 61% said it was for ‘general health and wellbeing’, 24% claimed it was for vitamin deficiency and 21% said it was to help joint health.

Esther Mills-Roberts, HFMA communications manager and registered nutritionist, comments: “2020 was a spotlight year for supplementation and the Health of The Nation survey results reinforces that consumers are actively seeking out more information, especially about immune health. Lockdown has shone a light on the importance of adequate micronutrient intake with respected scientists, such as Professor Philip Calder, publishing more work on the value of supplements in supporting immune function. These are critical times for public health and nutrition, with both health strategists and scientists calling for further research on key nutrients.”

Graham Keen, the HFMA’s executive director, adds: “The findings from this latest survey confirm that our industry continues to play a vital role in helping our nation to be healthier. And our products have probably never been held in more esteem by consumers, and perhaps more understood by Government and regulators, than they are right now.”