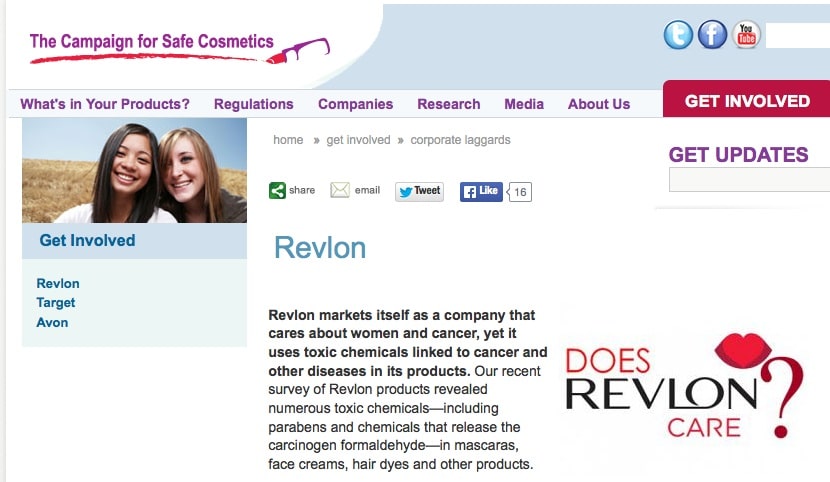 What’s going to be the biggest women’s beauty trend to cross over from America to the UK in 2014? If activist groups like the US-based Campaign for Safe Cosmetics have their way, it’s going to be full-bore consumer anger.

As Natural Products goes to press the pressure group has decided to directly challenge the cosmetics giant Revlon by publishing a survey which explicitly links Revlon products with cancer-causing chemicals, which it claims include BHA, BHT, parabens and quaternium-15.

The group isn’t mincing its message. It’s putting the c-word front and centre on its website to cause Revlon maximum embarrassment while also offering a delicious hook for campaigning journalists – what if a company which actively supports breast cancer causes was actually contributing to the problem it was helping to prevent?

To date, Revlon has issued a terse cease and desist letter (which you can find online) that defends their ingredients to try and defuse the situation.

The problem is, whatever the science behind the claims, it’s more proof that the tide in the US is now flowing firmly away from cosmetics giants towards a purer, and maybe safer, future.

The Campaign for Safer Cosmetics has, in part, made this possible through its canny women-centric campaigns. In particular its nifty video The Story of Cosmetics – which was screened as part of Horst Rechelbacher’s Natural Beauty Theatre talk at last year’s Natural Products Europe (you can find the video on YouTube) puts the argument for better cosmetics regulation neatly and eloquently.

For instance, last month Wal-Mart announced it now requires suppliers to eliminate certain chemicals found in cosmetics, household cleaners and beauty products. Of course, a corporate behemoth like Wal-Mart doesn’t do anything out of the goodness of its heart – it’s just chasing sales. And its marketing department thinks those sales are slackening off in products that shoppers consider unethical, synthetic or dangerous, and picking up in more natural alternatives.

It’s a major win which should help fill the sails of the international natural beauty industry as we come out of a tough year. But could something similar ever happen on this side of the pond?

The UK cosmetics industry is far better regulated than in the US. And its counterparts in the natural sector aren’t necessary born activists. But imagine what might happen if an angry and eloquent campaign emerged over here to give Proctor & Gamble something to worry about.

A concerted campaign conducted with the gloves off might not lead to riots outside Boots, but it might speak directly to that young woman who’s just done some research about what exactly goes into her favourite shampoo – and wants to fight back.