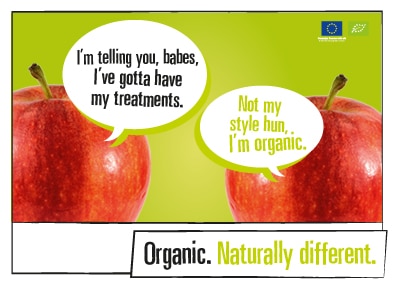 The Organic Trade Board says the EU has approved £1.4million of fresh funding for the Organic. Naturally Different campaign.

The EU’s cash backing, together with money pledged by organic brands and leading retailers, effectively secures funding for the campaign for three more years.

The OTB says the next phase of the campaign will build on the foundations laid previously by continuing to raise awareness of the benefits of organic food and farming in the UK whilst capitalising on the increasing volume of organic sales.

Due to kick off early in 2014, the activity will continue to use its edgy and humorous creative to communicate its key messages and will highlight the benefits of buying organic and show how organic products are different. The habit-changing campaign will comprise advertising, digital, social and PR over the course of the next three years.

More than 50 organisations have pledged money to the campaign including leading retailers Sainsbury’s and Tesco; big name organic brands such as Green & Black’s, Organix, Rachel’s, Alara and Community Foods; and producer groups such as Organic Farm Foods, Produce World, OMSCo and OLMC.

Says Catherine Fookes, campaign manager for the Organic. Naturally Different campaign; “We are delighted to announce the campaign’s continuation for the next three years. We have seen great success over the last three years both in terms of sales uplifts and changing consumer attitudes and this achievement would not have been possible without the support of our industry pledgors.”

Andrew Ovens, marketing director, Produce World said “In a tough economic climate, it’s great news for the organic industry that the Organic. Naturally Different campaign can continue to speak directly to consumers showing them what’s different about organic. The campaign has had clear and measurable results in terms of increasing sales with retailers and changing attitudes and we are really pleased to be a part of it.”

Karen Poole, senior marketing manager, Tesco Brands and a pledgor to the campaign, commented: “It’s great news for the organic industry that there is support to promote the benefits of organic. Where we have supported the campaign in store and online it has demonstrated measurable results, and we look forward to continuing our support and seeing the campaign increase momentum.”

For more information on the campaign visit www.organicukfood.com or the campaign’s facebook page at www.facebook.com/organicuk and Twitter [email protected]