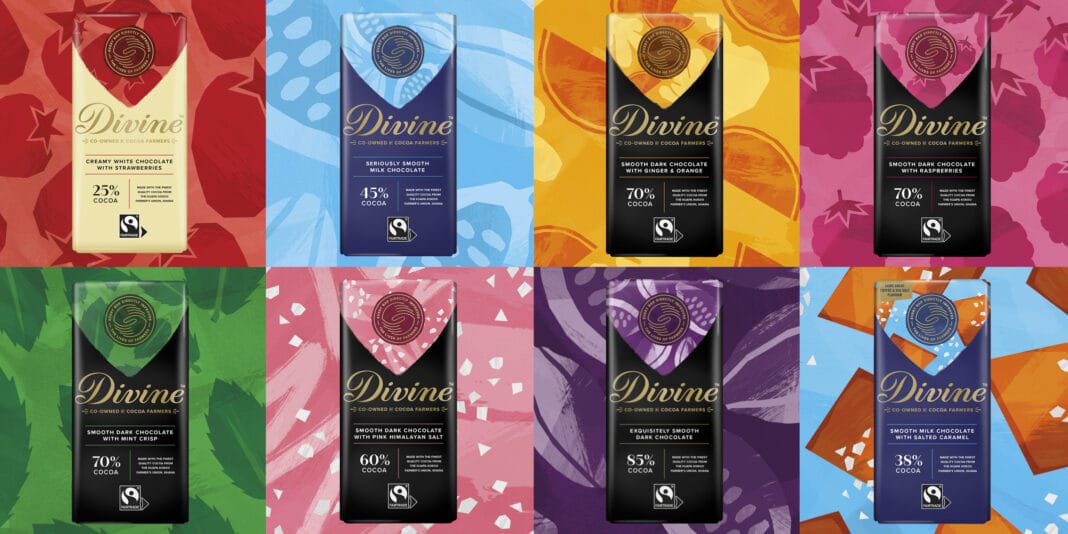 Fairtrade company Divine Chocolate has unveiled a total brand relaunch, as part of which it is inviting consumers to join its ‘chocolate revolution’ to fight exploitation in the cocoa industry.

The redesign has been implemented to better represent Divine’s core values and reaffirm its ethical credentials with bright, colourful new packaging and chocolate mould, a new logo and ‘bold communication plans’.

The brand took the refresh as an opportunity to also increase the sustainability of its packaging by removing embossed foil logo to facilitate recycling; removing the outer case from the sharing bars packaging, which will save 6,000kg of cardboard each year from the packaging process; and adding OPRL logos across all packaging.

Divine is co-owned by the Kuapa Kokoo farmer cooperative in Ghana, which grows the cocoa that makes the brand’s chocolate, a reflection of its belief that producers should earn a share of the profits they help to create and have a say in how the company is run.

We want to lead by example, putting farmers at the heart of the business and helping to create a world in which they thrive and prosper

“The cocoa industry is valued at over $100 billion worldwide, yet the average cocoa farmer typically only earns as little as $1 per day,” says Ruth Harding, Divine’s MD. “As a purpose-led company, we are frustrated at watching the chocolate industry treating cocoa farmers as invisible. We want to lead by example, putting farmers at the heart of the business and helping to create a world in which they thrive and prosper.”

Divine says that in collaboration with Kuapa Kokoo it is establishing a chocolate revolution to drive change into the heart of the cocoa supply chain, fighting exploitation such as child labour and gender inequality, redistributing wealth and enabling cocoa farmers and their families to succeed and flourish.

Sophie Loveday-Davies, the brand’s marketing director, adds: “We recognize that in today’s world people are becoming increasingly conscious about the brands and products they choose, and the impact they have both socially and environmentally. However, we also know that delicious chocolate is hard to resist and so the relaunch was focused on combining the amazing taste and quality of Divine chocolate with a core product truth ‘Every Bar Directly Improves the Lives of Farmers’ – clearly demonstrating that every small choice can drive change.”