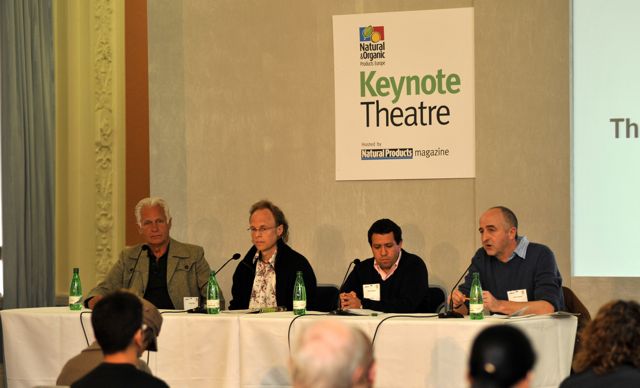 What should independent retailers do when a pioneer natural or organic brand is acquired by a major multinational?

That was the question under discussion at ‘Ex-Factor The Seminar’, a special session at last week’s Natural & Organic Products Europe conceived and chaired by Simon Wright.

If there was a single message to take away from the discussion it went along the lines of: “Don’t punish the pioneer brands who have blazed a trail for natural and organic for so long, but do actively nurture the small specialist brands who are the next generation of pioneers”.

But of course each of the four panellists on the session — two retailers and two brand owners — brought to the table a very well-informed personal take on the issues in hand.

Retailer John Grayson (Earth Natural Foods) said that while in an ideal world most independent retailers would like to restrict themselves to selling products made by small ethical companies, trading in the real world meant this often wasn’t an option.

Grayson said: “The reality is that it would be very difficult to run an independent food shop and excluding the brands that are, by definition, the best-known and biggest sellers. If you did you’d probably lose a lot of income and potentially alienate some of your customers.

“Well-known brands also create the bridge effect that helps consumers make the transition from supermarket shopping to independent retailers. There are already so many standards you can apply — creating another reason not to sell could make life very difficult.”

“There are already so many standards you can apply — creating another reason not to sell could make life very difficult.”

But Grayson was a strong advocate of nurturing small brands, suggesting: “A good compromise is to sell up-and-coming brands alongside well-know brands and let customers choose.”

Peter Langsam from Planet Organic said that his approach was largely determined by the question ‘is the product organic or not?’. He told the audience: “For me, the bigger picture is very important — the more organic food out there the better. That’s it full stop. If that comes from a multinational buying a small brand and growing it, that’s fine. If it’s a multiple retailer buying a small organic food store, that’s fine. If more organic crops are being grown, and more people are eating them, that’s really where it starts and finishes for me.

But Langsam added: “Where I would be concerned is if the big companies started to influence organic standards and they became diluted as a result.”

Booja Booja founder Colin Mace noted that the common desire to “make the world a better place” was a characteristic that made the natural and organic sector unique. But he argued that business ethics were a complex area and that the most important priority should be to have a coherent overall policy.

Mace said: “If you are a strongly ethical business — as we believe we are — It could be quite easy to end up with a list of trading criteria so complicated that you could barely do any business! So the important thing is to focus on the things that are really important to you. Make sure you know what are your non-negotiables, and what are your would-like-tos. If a multinational fails on your non-negotiables, then delist its products.”

Green & Blacks and Whole Earth founder (and independent retailer himself) Craig Sams noted the inevitable “tension between what you’d like to do in an ideal world and what will work for your customers”.

As a brand owner Sams admitted he had committed some “unholies” himself. “One was offering our peanut butter to the supermarkets, which independents reacted pretty negatively to, and another was launching a a sugar-containing product — organic and Fairtade chocolate — into the natural food trade when sugar was a big no-no. Community Foods wouldn’t take it at first and neither would Planet Organic. I remember writing a three-page letter to Reneé Elliot listing all the reasons why I thought she should relax about this particular one!”

Sams argued that pioneer natural and organic brands had little option but to sell to bigger owners as they grew: “You need more resources for your organic brand to reach the destiny it deserves.” But he said that selling even the smallest stake in a business meant that its destiny was taken out of its originator’s hands. “William Kendall (co-founder of The New Covent Garden Soup Company) said to me when you sell one share in your business, it’s not yours any more.”

Sams insisted that both Green & Black’s and Cadbury had learned from each other. “The net effect for Green & Black’s is that we have gone from dealing with 200 to 10,000 cocoa farmers. And so you see more and more farmers converting to organic.”

“The net effect for Green & Black’s is that we have gone from dealing with 200 to 10,000 cocoa farmers. And so you see more and more farmers converting to organic.”

But he also noted: “Generally, multinationals daren’t look forward — it’s not in their culture. And they make some dumb decisions. But they know how to manage their businesses incredibly efficiently.” And for anyone who thought they could entirely avoid contact with multinationals he added: “Multinationals already own large parts of the supply chain. You’re already dealing with them.”