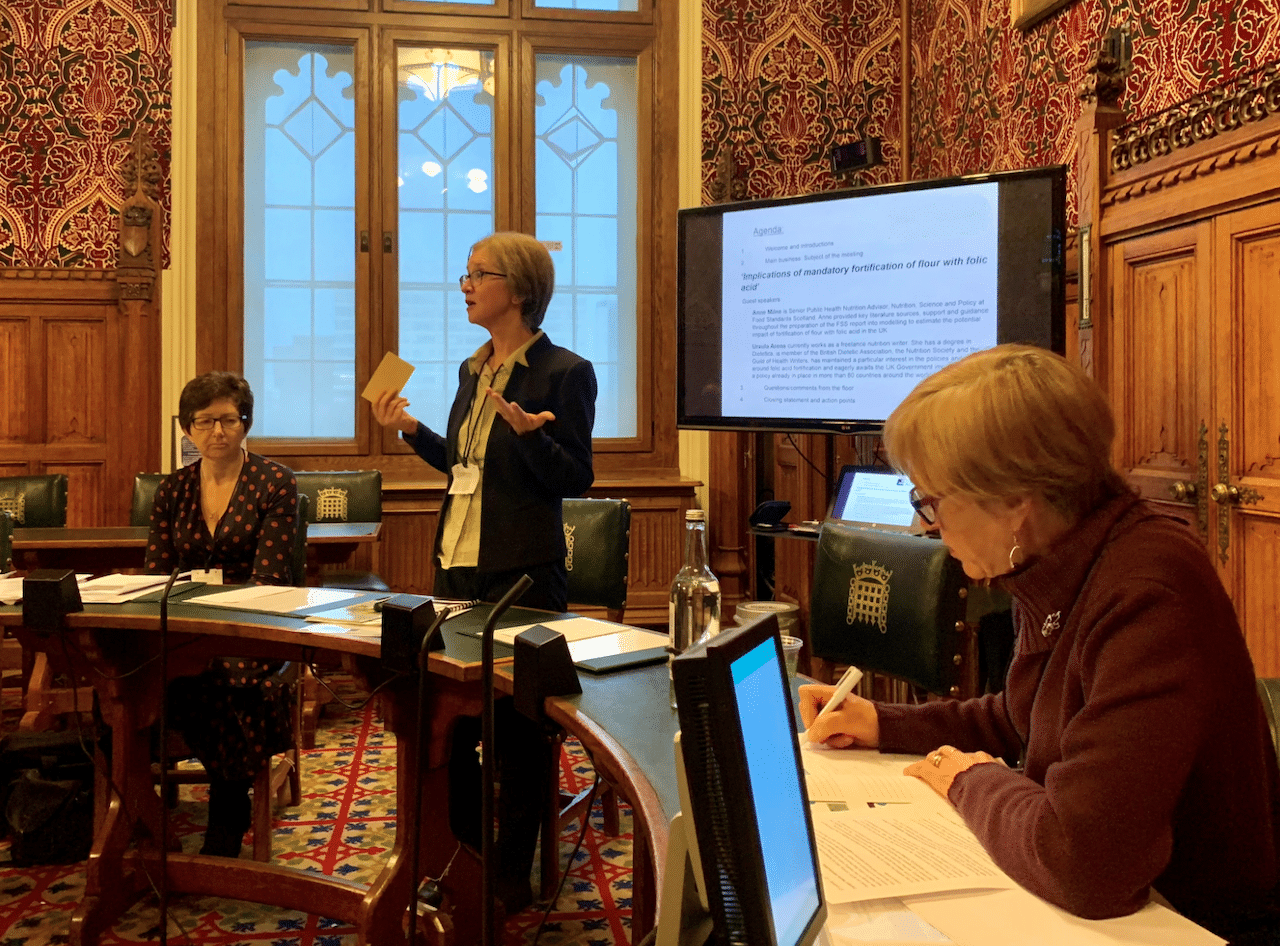 At a recent Health Food Manufacturers’ Association (HFMA) meeting of cross-party Parliamentarians in Westminster, the subject of mandatory fortification of flour with folic acid was explored, with particular emphasis on its potential implications.

With the Government planning a consultation on the matter in early 2019, the HFMA highlighted the aim to be a discussion about ‘current evidence-based medicine on, and safety of, folic acid fortification’.

The meeting was chaired by Dr Michele Sadler, a consultant and Registered Nutritionist with more than 30 years’ experience, who wrote the dossier for what is currently the only approved EU health claim which directly links folic acid supplementation with a reduced risk of neural tube defects (NTD) in infants.

Speaking first was Ursula Arens, a member of the British Dietetic Association, the Nutrition Society and the Guild of Health Writers, with a degree in Dietetics. Arens pointed to ‘overwhelming evidence-based research’ in favour of fortifying flour with folic acid. Highlighting over 80 countries worldwide which have already introduced the fortification of flour, Arens referred to a ‘surprising’ lack of response from the UK and Europe, where no countries have, to date, followed suit despite ‘clear evidence’ of the benefits.

Anne Milne followed – a Senior Public Health Nutrition Advisor for Nutrition, Science and Policy at Food Standards Scotland (FSS) – with a presentation focusing on a specific report carried out by FSS into the potential impact of fortifying the UK’s flour with folic acid. Milne voiced her concerns surrounding a lack of women (one third) taking folic acid supplements before conception and during the first 12 weeks of pregnancy, despite well-publicized Government advice to do so. Milne’s position remained pro-fortification of flour; she highlighted bread as a ‘good choice of vehicle’ for folic acid fortification due to fact that a large majority of women regularly consume wheat flour bread, but stressed the importance of supplements in addition, since fortified wheat flour alone would not provide sufficient quantities.

In a statement released following the meeting, the HFMA said: “As the discussion opened up to the floor, questions raised included the potential risk of the raised folate status, in the presence of vitamin B12 deficiency in older people, including increasing the risk of masking pernicious anaemia, and the potential for fortification to be a combination of folic acid and vitamin B12 to address this concern, which may, in addition, provide a further protective effect in relation to NTDs. This was followed by an important discussion on the upper level for folic acid being outdated, and a review could allow for higher fortification levels to increase the reduction in NTD incidences still further. Another question was raised about whether sufficient research had been conducted into the potential stability issues if folic acid is added to flour in the UK that is already fortified with iron, calcium, thiamine and niacin.”

It was concluded via unanimous agreement that ‘the critical issue’ remains the need to address women’s general lack of awareness of the importance of folic acid supplementation; further, it was proposed that the Government’s messaging campaign needed new ‘impetus’ to avoid a situation in which women mistakenly believe eating fortified bread will provide adequate levels of folic acid.

The cost of the additional bread required to be consumed … even if we could persuade them to eat four times their normal daily bread consumption, would be between 25p and 30p per day

Responding on the issue of obesity and the growing popularity of low-carb diets, Graham Keen, executive director of the HMFA, agreed the UK’s declining consumption of bread (down 12% in the last five years) should be a point of consideration. Women, according to Keen, are able to purchase folic acid supplements ‘for less than a penny a day’. “Whereas,” he adds, “the cost of the additional bread required to be consumed … even if we could persuade them to eat four times their normal daily bread consumption, would be between 25p and 30p per day.”

Summarizing the meeting, Sadler said: “I think there is little doubt that the overall folate status of the general population would improve as a result of mandatory fortification. But raising awareness and education on the need to take a supplement is critical, as women … may mistakenly believe that including bread in their diet means they are no longer at risk.

“So I think a key action step from today would be to continue to support the fortification of flour with folic acid, and welcome the resulting up to 25% reduction in the incidence of NTD this may bring, but step up the pressure for a stronger communications campaign for the additional supplementation that young women need, which would improve the reduction in NTD to just over 70% if all women were to follow the advice.”