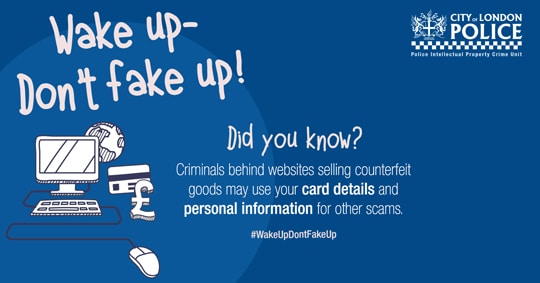 Providing yet another reason to turn to natural and organic products when it comes to your skin, the Police Intellectual Property Crime Unit (PIPCU) this week launched an awareness campaign: Wake up – don’t fake up in a bid to warn people about the risks posed by counterfeit beauty products.

It is estimated that in the UK consumers spend at least £90 million every year on fake goods, and this is only increasing with the popularity of buying online.

Lab tests have shown that counterfeit perfume often contains poisonous chemicals including cyanide and even human urine, and fake make-up products have been found to include arsenic, mercury and lead.

As well as causing allergic reactions, such as skin irritation, swelling, rashes and burns, these toxic substances can leave consumers with long-term health problems.

Counterfeit make-up is often produced in un-sanitised and un-hygienic factories, says the campaign, and there have been cases where rats’ droppings and poison have also been found in the phoney cosmetics.

“Many people don’t know about the real dangers counterfeit beauty products pose to their health and so that is why this week we are urging the public to Wake up – don’t fake up! Our general rule is if it seems too good to be true it probably is!” says detective superintendent Maria Woodall, City of London Police.