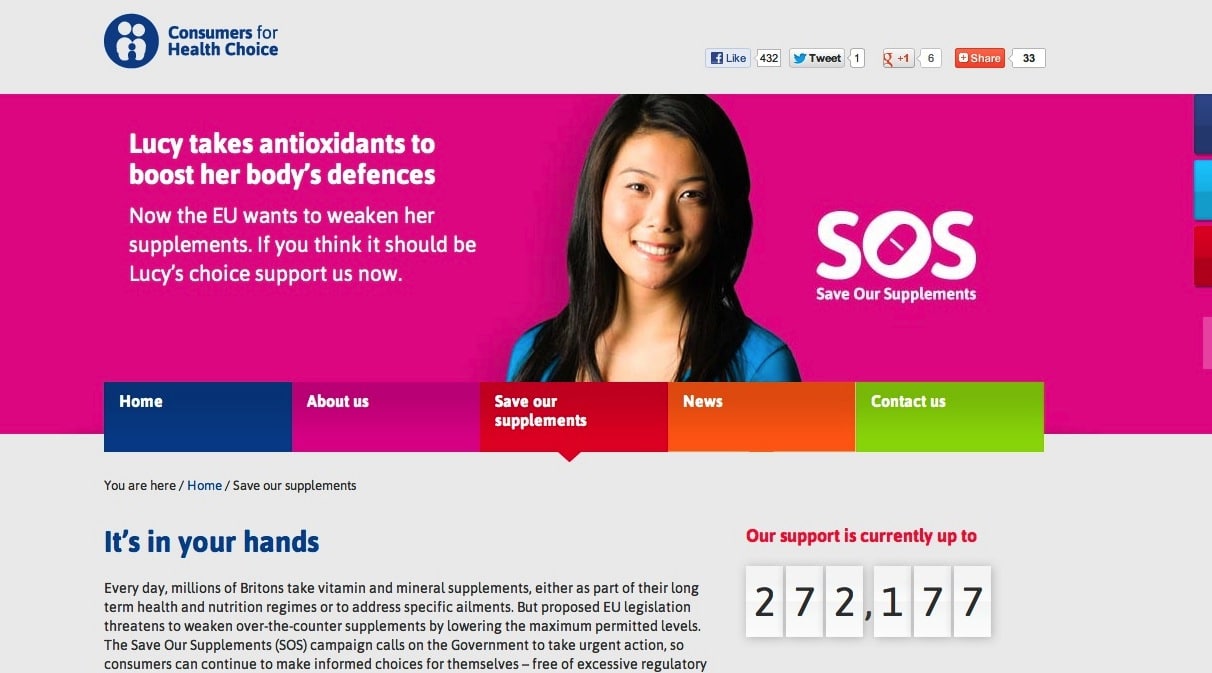 CHC says that new developments in Brussels have put the issue of maximum permitted levels (MPLs) for nutrients firmly back on the political agenda with the expectation that this would stifle consumer choice and remove large number of safe, popular and beneficial supplements from the market. It is estimated that 700 independent health food shops from High Streets across the UK would close with the potential loss of 4000 jobs if the EU imposes low dose levels.

In response to this renewed threat, CHC has launched a brand new highly visible Save Our Supplements (SOS) campaign that will draw attention to the issue and encourage people to sign a petition against the directive and contact their MPs and MEPs to raise increased awareness.

The hub of the campaign can be found at www.saveoursupplements.org.uk and links to Facebook, Twitter and YouTube SOS accounts. A high visibility online petition and new tagline; ‘It’s in Your Hands’ highlights CHC’s commitment to championing consumer freedom of choice in health matters.

The campaign is also supported by a nationwide roll-out of SOS communications across 650 Holland & Barrett stores and hundreds of independent retail stores, gyms and fitness centres – backed by extensive online advertising and social media activity.

“We support this campaign 100%. It is right that the Government should work hard in Europe to ensure that British consumers do not lose access to thousands of safe and popular vitamin and mineral supplements which have been taken by millions of people over many decades with no evidence of harm to help achieve and maintain good health. This is over-regulation gone mad and it is only right that consumers should keep up the pressure so that their right to choose is not sacrificed on the altar of market harmonisation in Europe.

“Consumers for Health Choice havs done a fantastic job in making the humble vitamin pill a matter of national and international political importance. This campaign will make sure the matter remains high on the political agenda.”

“Consumers for Health Choice have doggedly led a very well thought through campaign to protect us from unnecessary EU restrictions on the right to take safe nutritional supplements. The threat of restrictions is real and right now they need our help and support. Make sure you are on their mailing list and, if they say it’s time to sign their SOS petition, write to your MP, MEP or take any other action, please do so without hesitation. Thank you CHC.”

CHC Chairman Mike Peet said: said: “We’re fighting hard to keep this issue on the political agenda and it’s not over yet, the setting of maximum permitted levels is still a matter of controversy in Britain and there remains strong, vocal and cross-party opposition. Our new SOS campaign harnesses the full power of the internet and social media, so it will be easier for us to reach a much wider audience and a new generation of consumers to keep awareness and support high in the public consciousness.”

He added: “We have been successfully campaigning against the introduction of unnecessary EU restrictions since 1997. The response to our petition has been phenomenal but we need continued support to keep the pressure on the UK parliament and in Europe. We’re urging everyone who believes they have the right to access a wide range of vitamin and mineral supplements and herbal remedies, to.pledge their support and sign our petition – it really is in your hands’.

Consumers can sign the petition and learn more about the campaign by visiting www.saveoursupplements.org.uk