Following Wendy Atkinson standing down as chair of the NAHS at its recent AGM, Gary Trickett has been proposed elected as the organization’s new chair.

With a chain of three Healthy Route stores in the East Midlands, the most recent opening in Derby last year, Trickett, who has been on the NAHS committee for four years, says: “I’m very passionate about my industry and I’m coming up for 30 years within it so I felt that this was my time to give something back – you know it’s given me a career so I thought I ought to stand up and put my head above the parapet.”

He continues: “I’m very honoured obviously, but I am also very conscious that we still have a number of issues that we’ve got to overcome as an industry. One of the things to do is actually take some of the pressure of the NHS. Really we should be there as the first port of call for people with coughs and colds and those everyday kind of illnesses. We ought to be part of that holistic health approach, so that’s something that I want to enlarge. I would like to think that as an industry we can stand up and become more qualified and be seen more as a legitimate part of the healthcare of the country. I’d like to get us as an industry, and the stores in particular, more well known so that doctors feel they can advise their patients to come into their local health food shop and pick up vitamin D or try supplementing with echinacea rather than asking for antibiotics.” 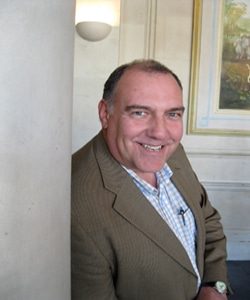 Trickett is also keen to highlight the mutually beneficial relationships that can and should exist between all industry members. “When we opened our Derby store last year one of the things that we did with our main suppliers is ask them to almost buy into the business, and I don’t mean that in financial terms, but if a local rep works with me in promoting my store I will buy more from them, that in turn safeguards his job and allows him to hit his target, which then pays for a couple of guys at the warehouse back at the factory,” he explains.

“My core themes are to promote the association going forward and to make sure that outside of our industry people know who their local independent health store is and how we can contribute to the health of the country. But within the industry it is to try to become more integrated so that we do become a stronger, more powerful, voice in retailing.”

Trickett pays tribute to the outgoing chair, saying: “Wendy has worked really hard to navigate us through a very transitional period for the association, with all the legislation that’s come through, and has tried to upgrade the association to truly represent health food stores.”

Atkinson was awarded the Natural Products Special Contribution Award at Natural & Organic Products Europe this month, partly for her role as chair of the NAHS.

“I am extremely proud to have received the Special Contribution Award for contribution and commitment to an industry which I have been fortunate enough to have worked in for over 25 years, and to which any contribution within our industry is such an absolute pleasure.  The people, products and ethics of our industry are second to no other!” commented Atkinson, who is also the MD of Modern Herbals.