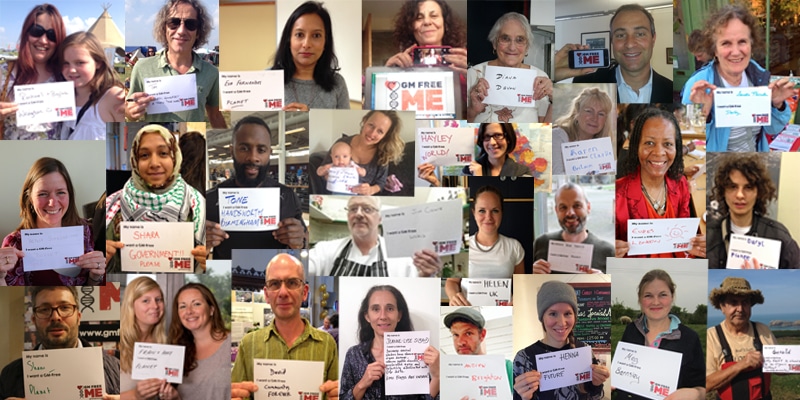 Well-known figures from the natural products world have been getting behind a new initiative that aims to give ordinary people a louder voice in the intensifying debate on GM foods.

The GM Free Me initiative takes the form of a ‘visual petition’ where people upload a photo of themselves holding the downloadable GM Free Me Card with a personal comment. They can then share their photo and comment on social media, or even send it to their local MP using a special link.

Among the 1200 photos already uploaded to the GM Free Me website are some familiar faces from the natural and organic world including Peter Kindersley from Neal’s Yard, Alara’s Alex Smith, Sebastian Pole of Pukka Herbs, Doves Farm’s Michael Marriage and Guy Watson from Riverford. Leading figures from media – including George Monbiot, Lucy Siegle and Joanna Blythman – appear too.

GM Free Me has been set up by the new campaigning group Beyond GM which aims to revitalise public campaigning in the UK, raise awareness of the issues surrounding GMOs and highlight alternatives.

Beyond GM was the group responsible for last November’s Letter from America initiative an open letter from US citizens to UK citizens which was a plea for the UK and the rest of Europe not go embrace GMOs the way the Americas have. It was launched with a full page letter in the Times and a massive digital billboard across the concourse of London Waterloo, the UK’s busiest rail station. 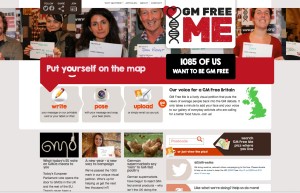 Commenting on the thinking behind the GM Free Me initiative, former Ecologist magazine editor and director of Beyond GM, Pat Thomas, said: “We felt we needed to provide a space where people could air their views and equally importantly one that would show that those of us who have concerns about GMOS in no way represent the caricature of the hair-shirt wearing hippie or the fringe loner. The people who have added their photos to the site could be your mum or your boyfriend or your daughter or the newsagent or the local taxi driver or someone you sat next to on a train. And in fact they are all these people. And what they have to say is important.”

“The people who have added their photos to the site could be your mum or your boyfriend or your daughter or the newsagent or the local taxi driver or someone you sat next to on a train. And in fact they are all these people. And what they have to say is important”

Thomas says that GM is as much a social, political and ethical issue as it is a science one. “It is the refusal to see the GM debate in its totality that has led to the current stagnation of the debate. What can break that stagnation is bringing the public back into the debate.”

In addition to seeking photos and selfies from members of the public the campaign has also sought out green and ethical businesses whose employees and customers have an interest in food, farming and sustainability. Visits to these companies premises and shops has started face to face conversations, a human touch that Thomas believes is many times more valuable than doing things solely by email or social media.

One of the first companies on board was Neal’s Yard Remedies (NYR). Not only did staff at its head offices have the opportunity to get involved, shop staff signed up too and also gave out GM Free Me cards to customers. NYR owner, Peter Kindersley said: “As a British company which grows many organic ingredients ourselves, the threat of GM crops in the UK is a truly scary one. As we’ve seen in the US, contamination of organic, and even conventional farms is impossible to avoid, meaning our promise to only offer our customers products containing the purest, organic ingredients will be severely compromised. Just as importantly, it also takes away the consumer’s choice about what they put on their skin, as well as put in their body.

“The threat of GM isn’t just applicable to Neal’s Yard Remedies – I urge every brand who believes in promoting a natural, organic, healthy way of life to take action NOW.”

“I urge every brand who believes in promoting a natural, organic, healthy way of life to take action NOW”

Sebastian Pole at Pukka Herbs said: “Because GM Free Me is spreading awareness about the truths behind GM, Pukka wants to support it in its efforts to give a voice to people who want to live from food that is grown as nature intended.”

Alex Smith, founder of Alara Wholefoods said: “I support GM Free Me because of my very serious concerns about the environment and health risks associated with GM, especially now that the EU Commission has approved Subsidiarity with the planting of GM crops. The UK appears to be the strongest proponents of GM and I’m concerned that planting will go about in an unscientific and haphazard way.”

Cheryl Thallon, founder of Viridian Nutrition, said: “Viridian feels very strongly about what is growing in the fields of Britain and what effects this will have on the planet and on the health of the individual.  The genetic modification of food is a technology that goes against the key philosophies that Viridian holds dear.

“From a natural products perspective, our customers really care about this. Customers feel possibly more strongly about this than even businesses.  If your customers care about a wide range of ethical issues, then you better care too if you want to remain in business!  From a purely business perspective it makes sense.”