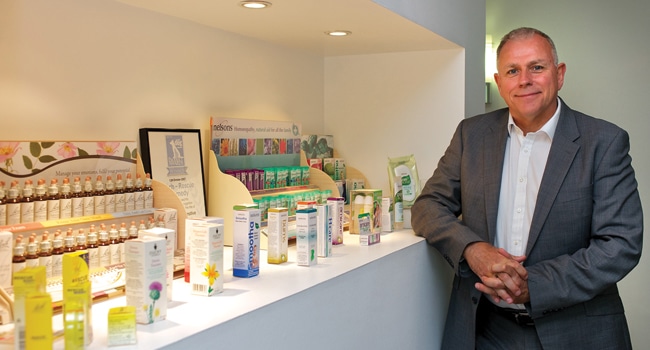 When we’re launching products it’s an important part of our business because we get a lot of support from them and also it’s a good barometer of how products are performing in general.

The story of Nelsons really begins with Samuel Hahnemann, the founding father of homeopathy. In 1860 one of his students, Ernst Armbrecht came to London where he set up a homeopathic pharmacy and put the principles of his teacher into practice. He married Charlotte Nelson in 1866 before changing the company name to A Nelson & Co. That’s the platform our business is built on. It basically started out as a pharmacy and evolved into a manufacturing business.

Back in the 1970s the last remaining descendants of Charlotte and Ernst were sadly killed in a plane crash. Dick Wilson, who had a real commitment to natural health care, was approached to take over the company.

Of course, in the 1970s and 80s there was an increasing demand for homeopathic remedies and it was Mr Wilson who started to sell over-the-counter homeopathic remedies in 1981. I think what happened is that consumers were starting to become disillusioned by allopathic medicine and were looking for alternatives. We saw that opportunity. It was the catalyst for us to say ‘there’s a lot of people looking for alternatives – we have the products for them, and we have to spread awareness’. That takes time. It doesn’t take a year or two – it takes decades.

As a small manufacturer, unlike large pharmaceutical companies who can spend millions advertising products, we were starting from small roots. Our awareness-building was focused on PR and word of mouth – that was the stimulus of our growth.

As a global brand one of our big challenges is copies and parallel trading. It’s companies seeing distinctive brands like Bach and thinking ‘they’re doing well – we could make a business out of that too!’

We work hard from a legal perspective to protect our brands – but it’s a little like Coca Cola isn’t it? Coca Cola’s red and white gets copied around the world. There are ways and means that competitors can attack your brands and it’s up to us to protect them.

Another big challenge is adhering to regulation in different countries. First you have to work out – Is the product homeopathic? Is it a supplement? Is it a food? Is it a medicine? You have to go through a lot of hoops and a lot of investment to get your product on the market. It can take several years before you get the licenses through. The challenge is to have the courage to make that initial investment.

In the UK we work very closely with the MHRA to ensure we always abide by the rules they set. But obviously there is a changing agenda for homeopathic products. For example, our homeopathic products are licensed as PLRs (Product Licenses of Right). However, there’s an ongoing review of the 1968 medicines act – which means homeopathy will no longer have PLR licenses, which we’ve had since the 1970s. Nelsons is now working with the MHRA to license our homeopathic products either under the revised simplified scheme or the 16.2 national rules scheme. We’re trying to fit our brands into those two categories.

Arnica has already been awarded a 16.2 licence – and currently the MHRA are reviewing a number of our applications.

The importance of  patient choice

I don’t want to speculate, but there’s more scrutiny on homeopathy today. There was the 2010 Select Committee hearing, and as far as we’re concerned there were lots of challenges – but the UK government decided there was a place for homeopathy in the UK marketplace. They said that patient choice is absolutely paramount. That’s very good, but unfortunately there are certain people who disagree with that. And we have to accept that people have different opinions.

We have to work within the boundaries set by the MHRA and provide high quality products that our customers want and go through the right legal processes. We’re in a strong position because of our heritage.

The area that we’re seeing the most growth with is our baby products. Mothers with babies and young children want to provide them with the best quality and they want to avoid chemicals if they can. They’re very well informed and they want natural alternative products. We’ve seen our Teetha brand show growth well ahead of market conditions in the last 12 months. I can see that continuing as there’s more babies being born and more well-informed mothers out there!

Another growth area that’s also linked to the baby boom is iron supplements. According to IRI the category is growing in terms of both volume and value sales. It’s currently valued at £6.4m – an increase of 17 per cent on the previous year. We’re finding our Spatone product is performing exceptionally well in the pharmacy, health food and grocery sectors as it appeals to a wide target audience of pregnant women, vegetarians and sports enthusiasts.”

The Power of Flowers

“The interesting thing about Bach is that it was Dr Edward Bach who approached our pharmacy in Dukes Street. He had a keen interest in homeopathy and had been working on the emotional power of plants. He approach Nelsons and asked them if they could bottle his remedies. That’s where the relationship between Bach and nelsons started.”