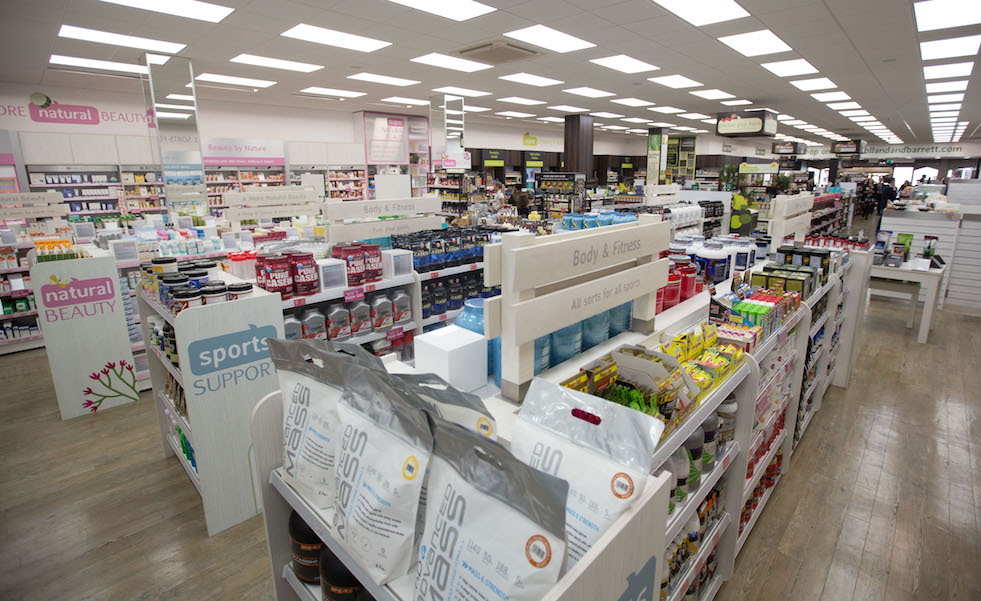 Natural Products News has been asking natural and organic industry insiders for their first thoughts on the launch of Holland & Barrett’s new ‘More’ store format.

The new large format stores – the first of which opened in Chester last month – feature a supersized free-from offer and also include fresh organic fruit and veg for the first time, along with in-store concessions (Chester gets a V-Bites café and Znerjii juice bar).

Holland & Barrett says it will open 50 of the ‘More’ stores in the coming two years. Equivalent to two store openings a month, that’s a very ambitious programme – and one that the major supermarkets, which H&B have in its sights, will be watching intently.

Cliff Moss, MD of Healthy Sales & Marketing, visited the new Chester store during the week it opened. He was clearly impressed by what he saw: “Holland & Barrett’s new ‘More’ stores have brought about a step-change in the company’s approach to both layout and store content. At around five times larger than the average H&B store, ‘More’ feels spacious and offers the consumer a great deal of choice in a well-planned and contemporary shopping environment.”

Moss also thinks the beefed up free-from offer makes perfect sense for H&B: “They’ve have created an outstanding fixture which far out-strips what other supermarkets have to offer. The ‘More’ concept takes ‘free from’ forward for H&B, presenting purchasers with complete product ranges and a wide variety of products. I expect ‘free from’ to grow up within this extended format.”

Turning to the impact on the trade, Moss told us: “Taking all of this into consideration, the ‘More’ concept could give brands operating in the natural health arena the impetus to grow, develop and experiment, and provide opportunities for manufacturers from overseas who have previously struggled to enter our crowded market. From a manufacturer and retailer perspective this can only be a good thing. Consumers are changing, and H&B is evolving to meet their more sophisticated demands.”

“Likewise,” he says, “the new ‘More’ stores feature category managed store fixtures, and if consumers respond well to this concept, independent retailers might also reap the benefits of a more category and space management-led approach.”

Simon Wright at OF+ Plus Consulting, told us: “We now know that ‘lifestyle’ shoppers buy more Free From products than those who have an allergy or an intolerance. So opening larger stores such as More where these shoppers can buy a wide variety of health-related items makes perfect sense. In some high streets H&B are the only independent source of natural foods, so expanding the format in this way is good for consumers. And it’s great to see that fresh organic fruit and veg is now included in the offer.”

New National Association of Health Stores (NAHS) chair, Gary Trickett welcomed the move by Holland & Barrett – with one proviso: “The recent opening of the new H&B stores is a clear sign of the general public’s demand for free from products, which we are all attempting to cater to. These new larger stores are obviously out to compete with supermarkets, not smaller independent stores who can offer a completely different shopping experience.

“Our only concern would be if H&B were able to offer bigger and bigger promotions on products that independents also sell and I hope that suppliers remember that independents need those deals too and as such we will be keeping a close eye on any promotions that H&B offer.” Suppliers – it’s over to you.