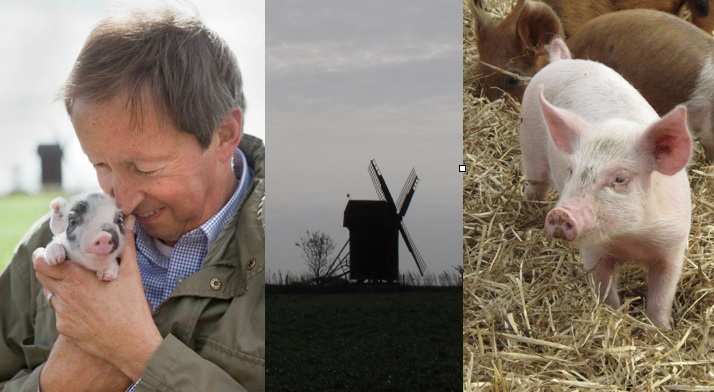 Ängavallen Farm in southern Sweden, 20km south of Malmö, has been a model for a kinder and more ecological way of farming for nearly 40 years.

And ‘kinder’ is word that Ängavallen’s owner and founder Rolf Axel Nordstrom is not afraid to use. In fact the farm’s very existence owes itself to Nordstrom’s lifelong love of animals.

Nordstrom, who grew up in the 1950s, befriended and kept small animals and insects from an early age and was completely fascinated by them. The fact that many of these ‘pets’ were confiscated and disposed of (“probably killed”) by his less fascinated father, the owner of Sweden’s largest paint making company, only stiffened young Rolf Axel’s resolve to work with animals. Nordstrom’s announcement a few years later that he would not be joining the family paint business, and would go into farming instead, resulted in the father not speaking to his son for three years.

To make matters worse, Rolf Axel’s vision of farming was entirely add odds with modern commercial farming practice, which was becoming more industrialised and monocultural by each passing year. His ambition from the start was to create an agriculture “conducted in harmony with nature”.

Over the years Rolf Axel Nordstrom  has earned himself a reputation as one of Sweden’s leading ambassadors for humanely produced, high quality organic food. Recently he was appointed Food Ambassador for Skåne, Sweden’s most southerly country, as part of the ‘Sweden, Country of Food’ initiative. But his appointment as local food champion wasn’t universally welcomed as he explains here to Natural Products editor Jim Manson.

Natural Products: Tell me about Ängavallen and what makes it special
Rolf Axel Nordstro: Ängavallen is a totally and fully integrated farm — field to fork. We’re 100% organic, no compromises anywhere. Every milligramme of what our animals — pigs, cattle, sheep — eat is organic and vegetarian. Because our cattle and sheep are pasture fed our veal, lamb and beef is naturally higher in omega-3. And slower growing animals, produces better tasting meat — and as with wine benefits from the terroir. We also grow ancient versions of wheat and these old varieties have more flavour, vitamins and minerals.

NP: Animal welfare is the top priority. What do you do differently in this respect here at Ängavallen?
RAN: Well for one thing there is no mutilation, no castration, no artificial insemination —our animals enjoy a true love affair! Our calves are naturally weaned — normally for 6-7 weeks — really until the mothers start to kick their cakes away because the feeding is hurting. Nature is allowed to take its course wherever possible.

NP: And you have a slaughterouse here on the farm?
RAN: Yes, all animals are slaughtered on the farm. No living animal should never be allowed to see a dead one, or smell blood. Our animals are taken one by one, attracted by food and killed quickly without any knowledge of what is going to happen. We periodically measure the stress hormone cortisol in blood samples to ensure the process is not causing distress.

“No living animal should never be allowed to see a dead one, or smell blood”

NP: How do you feel about modern, intensive animal production?
RAN: I’m completely disgusted by many aspects of industrial farming. In fact, I’d be a member of the animal liberation front if I wasn’t an organic farmer! The direct consequences of what we do today, paying farmers to produce the highest meat yield on animal, is that a great strain is placed on animals, often leading to trauma and heart attacks.

NP: And what do conventional farmers think of you?
RAN: Well, I spoke recently at major pork producers conference in Denmark, where they produce 24 million pigs. I’m sure quite a lot of them would liked to have killed me! But actually many of the younger generation coming into farming love what we do here. They realise they been fooled by images of the countryside where the sun always shines and everything is happy and natural — the reality is disgusting. It’s the new, young farmers who understand the values of the past — and that you can’t live by just selling on price.

” … many of the younger generation coming into farming love what we do here. They realise they been fooled by images of the countryside where the sun always shines and everything is happy and natural — the reality is disgusting”

NP: Does this make you optimistic about the future?
RAN: Yes, because I think other things are changing. For years Sweden created artificial markets that led to butter mountains and milk lakes which were then dumped onto the world market. As part of the new ‘Sweden, Country of Food’ initiative I am food ambassador for Skåne. Part of the role is to teach farmers to be entrepreneurs again, to create a real market for what they grow, to stay small and efficient. It is also about encouraging a biodiversity of farming.That has to be a positive step forward. And now we have thousands of people  coming to see what we do here at Ängavallen. Hopefully we can help them contribute towards a better future for food and farming.