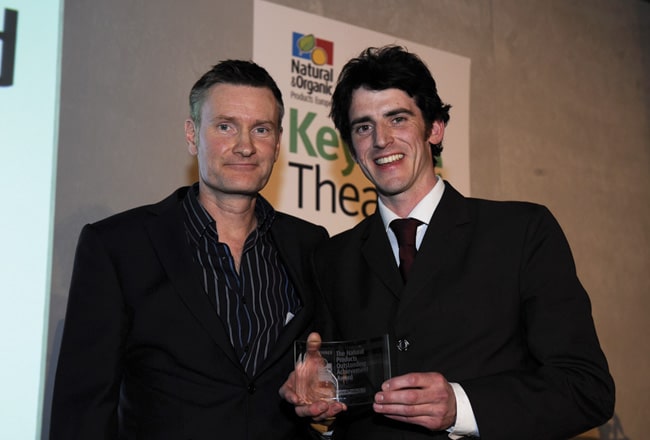 Patrick Holden, the Soil Association director, was named the winner of the 2010 Natural Products Outstanding Achievement Award at last week’s Natural & Organic Awards at Olympia. The Award was collected on his behalf by James Twine, the Soil Association’s commercial director (pictured here with NP editor Jim Manson)Here Patrick Holden talks to Jim Manson about winning the award, and about the advantages in his role of being able look back — as well as forward.

Jim Manson: How do you feel about receiving this award?
Patrick Holden: I feel incredibly honoured. And I was so pleased that Jim Twine picked up the award on my behalf because I’m a really big fan of his.

A shared characteristic of many previous winners is long-term involvement in the industry. I think a long-term involvement gives you the aerial view. As one of the people who literally drafted the first organic standard I am in the privileged position of  being able to look back at the history — as well to the future — of this incredible movement. I feel proud to be one those 100 or so people who hatched the big idea all those years ago.

JM: How did you see it all then?
PH: What we were doing was defining the system that would be the enabler for a more sustainable food and farming future. And that is the really important part of it — being the enabler for positive change.

Sometimes that fact gets a bit lost in translation, especially when you hear people saying “organic is a niche market”, “organic is a lifestyle choice”. We need to remember that the public really do want to do the right thing, and that if we are to successfully reinvigorate the organic sector again that role of enabler needs to be at the forefront of our thinking.

Building awareness is such an important part of what I set out to do, because out of awareness and communication comes trust. That’s why talking to the media is so important.

JM: Do you think the central message sometimes gets a bit lost too?
PH: There is a perception in the media that organic is now more about commercial considerations than it is about the public interest. I think serving the public interest should always be the top priority because if you do that properly the market, in many ways, will look after itself — because people will say “I trust that, and I’m going to buy those products”. Perhaps that’s a bit of an unfashionable view at the moment, but I really do believe it.

JM: So what do you think should be the focus now?
PH: I think we need still need to be issue-focused in our campaigning. I agree that we need to tell our story better, but I think we need to resist going down the single-message route of marketing. That works well for Fairtrade, free-range and local, but organic is about a holistic approach and whole range of benefits. And that’s not always understood by the public. Quite a lot of people don’t know, for example, that organic has such high animal welfare built into its standards, or of its strengths in terms of resource conservation. So I think we need to communicate the true sustainability of our systems based approach. And we have to be able to communicate that conceptually.

We’re at a really important moment. It’s a time for all of us to be making important choices — as citizens, politicians and as businesses. As a movement and as an industry, we — in organic — have to recognise that we’re not the only people pursuing sustainable alternatives to industrialised farming. We need to work together with all those people and organisations who are trying to do the right thing.

JM: What was your first reaction to hearing you’d won the 2010 Outstanding Achievement Award?
PH: It was an instant reminder of all the amazing friendships I’ve made along the way. It makes you very aware of that sense of shared values that has always characterised our industry and our movement. It’s these deeper values, and the human and spiritual dimension, that I realise have given me so much nourishment.

Patrick Holden was brought up in London. He visited a dairy farm near Epping aged five and decided he wanted to milk cows. He studied biodynamic agriculture at Emerson College in 1972 and started a community farm in West Wales in 1973.

The 93 hectare mixed organic farm is now the longest established organic dairy farm in Wales, with a herd of 65 Ayrshire cows – the milk from which is being made into an unpasteurised cheese by his son Sam. Patrick still milks his cows at weekends.

He is a regular broadcaster and speaker and was responsible for Tony and Pat Archer’s conversion in 1985 and still advises for the Archers on matters organic. He was awarded the CBE for services to organic farming in 2005.