Ever wondered how to make frozen free-from desserts so creamy and smooth that even the toughest ice cream connoisseurs would be fooled? Simon Foster from vegan ice cream company Yorica is here to explain (some of) the brand’s secrets to success, Rosie Greenaway reports.

It always happens this way: the demand for ice cream shoots through the roof at the first hint of spring sunshine. And while Unilever has its big-budget advertising campaigns, there’s a multitude of brands working quietly behind the scenes to challenge the transnational – and more importantly, satisfy the needs of their devoted free-from customers.

A good example is Yorica, the brainchild of the brand’s founder, whose son suffered intolerances to 13 of the 14 major allergens. Tired of the lack of allergen-free options when dining out, he established a free-from ice cream parlour on London’s Wardour Street, selling scoopable and soft-serve ice cream in 12 diverse flavours, along with crêpes and waffles – but critically, each and every one was free of all 14 allergens. “It’s where he took his son at the weekends and it became locally famous,” says Simon Foster, Yorica MD.

“Very quickly the store established about half a million in sales turnover each year and a huge social media following. It became quickly apparent there was a huge market for this. Research showed that 7% of the population are poorly served for multiple allergies [and] intolerances.”

Initially Yorica only supplied the parlour, then came the retailers: Ocado first, then Waitrose and now over 600 Holland & Barrett stores. “We’re actively seeking a distributor for independent trade … we’re in advanced talks about this.”

Feeling free
And so, customers flocked to Wardour Street, in particular parents concerned about the risk of their children being exposed to hidden or trace allergens. Those with multiple allergies became loyal to the parlour. “There’s nowhere else they can be certain the product hasn’t got alibi declarations on the back – the small print that says it’s your risk. All of our products are guaranteed to be all 14 major allergen-free and are Vegan Society-approved,” says Foster.

Getting to a point where Yorica could guarantee its allergen-free claims was no mean feat and required the brand to ‘run a clean room approach’ to manufacturing. Through a small production site – ‘about the size of two squash courts’ – in Ealing, Yorica produces approximately 50 tonnes of ice cream a year.

“Being so small, it’s very easy for us to create a clean environment. We can demonstrate legally that we have control of our supply chain; our ingredients only come from manufacturers that are also 14 allergen-free. Yorica is only made by Yorica, and all of our suppliers have to be certified 14 allergen-free on every palette they send; they have to give a certificate with every palette. It’s quite an undertaking.”

Here comes the science
So how does Yorica achieve that smooth, velvety texture on the tongue? Vanilla is the ‘acid test’ of whether you can make ice cream, Foster asserts, as he explains the two most important factors: the ratio of liquid to fat and the speed at which the product is frozen. “It’s getting the water and the fat to stick together that gives it that really great creaminess. We use coconut cream for the fat proportion … and rice milk alongside it to downweigh the coconut flavour; some people don’t want the full ‘Bounty experience’. The softening impact of rice against the coconut gives you the balance. Then the real skill in ice cream is the smoothness.”

Foster gives snow as an analogy: with a fresh snowfall, if the temperature fluctuates you end up with ‘crusty, icy snow’ because the crystal size increases. The same happens when ice cream is frozen too slowly or allowed to partially thaw before being re-frozen – ‘temperature abuse’, he calls it. But moisture which instead freezes ‘extremely fast up in the clouds’ delivers a soft, fluffy snowflake. “Same with snow, same with ice cream,” Foster explains.

The key to creating the ideal texture that won’t leave crunchy crystals on the tongue is the speed at which you get your ingredients from nought to minus 20 degrees, while constantly stirring. It then goes into a blast freezer which Foster likens to ‘a hurricane wind blowing’ – “You get the windchill factor, so you can drop the temperature really fast – the crystals have no time to form.”

Flavour behaviour
Brits, says Foster, are a ‘horribly predictable’ bunch at heart. While Yorica launched with ‘all kinds of crazy’ flavours, it quickly became apparent that beetroot ice cream was ‘beautiful to look at but no one was ordering it’. Equally, matcha photographed well but the caffeine content sent children hyper.

Thirty years ago, the favourite was Neapolitan, but now strawberry has been replaced; when Yorica entered the retail sector it did so with modern classic salted caramel, traditional vanilla and chocolate. Where premium ice cream trends are concerned, this powerful trio is ‘the battle ground’. “Those are the ones that sell,” confirms Foster.

Another British favourite is on the horizon; mint choc chip could eventually join the retail line-up. “That would be commercially the next most viable one. But I need to prove to Holland & Barrett, Waitrose and Ocado that I deserve that space.” Until then, it’s one scoop at a time for the brand, as we sizzle our way towards summer and the peak ice cream season.

Behind the freezer doors
When NPN visited Bristol’s Better Food in March – before lockdown began – its staff presented a generous deep-freeze chest full of frozen packaging-free fresh produce to sell alongside its line of frozen croissants for home baking. In early spring that freezer was packed full of loose spinach, sweetcorn, green beans, peas, blackberries, strawberries, raspberries, mixed berries and blueberries, allowing customers to purchase whatever amount they desired.

The store’s approach to frozen fresh produce, staff explained, is very much seasonal; its summer stock bears no resemblance to its winter stock. A generous square footage allows Better Food the space for such a range, but what about in smaller stores; how do those retailers decide which products get the freezer space?

For Kelly Kemp, director of Wild Thyme Wholefoods in Southsea, lack of space is always a challenge, but the store stocks what it can. “We have around 50 items in the freezers – there is so much more we’d like to get in but space is always an issue when it comes to frozen items.”

Deciding on which items make the cut usually involves a combination approach of staff favourites and customer demand, explains Kemp. “It’s a mixture of things we have tried ourselves and recommendations from customers. Also, trying to get a balance between what is good quality and a good price.”

If Kemp had to single out the best sellers, they would be ‘the staples such as veggie sausages and veggie burgers’. “The Vegetarian Choice frozen range is a classic and is cheap!”

While dried and canned goods saw the bulk of the panic-buying in March, the store has still enjoyed stronger than normal sales of frozen foods. And since beginning to offer home deliveries, Kemp has noticed a trend in customers adding frozen pizzas and ice cream to their orders. 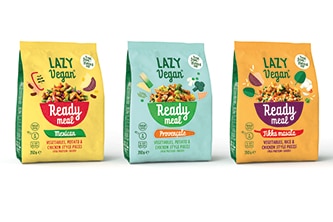 The most easy meatless meal (and probably also the most tasty)

Our meals are perfect for your lazy Friday or any other day in the week, when you don’t want to spend ages in the kitchen. You just stir fry for 8 minutes (from frozen) and have a healthy meal.

Lazy without feeling guilty, because our plant-based meals contain 100% natural ingredients, are full of vegetables and come with chicken-style pieces made from pea protein. They are free from gluten and soy! But most importantly, people tell us they love the taste.  Available at Sainsbury’s, Ocado, Wholefoods, As Nature Intended, Planet Organic and Leading independent retailers. www.lazyvegan.com 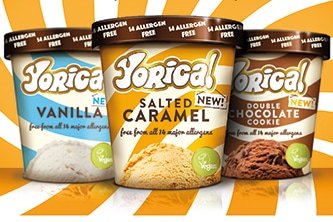 Yorica is the uniquely All 14 Major Allergen Free and Vegan ice cream brand that tastes as good as premium dairy ice cream. After 2 years perfecting the recipes in their Soho parlour Yorica have expanded into the take home market via Ocado, Waitrose and now over 600 Holland & Barrett stores nationwide. Yorica is available in 500ml tubs in 3 flavours: Double Chocolate Cookie, Vanilla and Salted Caramel. Yorica has a huge social media following of fans who follow an allergy exclusion diet.  Come join us at #yoricamoments and see what all the fuss is about. 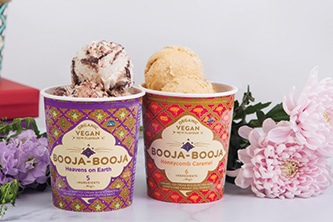 Booja-Booja, the multi award-winning vegan ice cream maker, has added two scrumptious new flavours to its delicious dairy free range. Honeycomb Caramel features sweet crunchy honeycomb pieces in a velvety caramel ice cream and Heavens on Earth is a sublimely refreshing mint ice cream swirled with yummy chocolate truffle sauce. The two new flavours are available now, with a special offer of 15% OFF running with all wholesalers throughout May and June.

The two new varieties join the company’s six existing flavours to make the Booja-Booja range one of the largest vegan ice cream selections available in the UK. The launch is part of a brand refresh, with the vegan message taking centre stage, on bold, colourful pot designs.

The ice creams’ remarkably creamy texture comes from nutritious cashew nuts; which the company has used as the base for its frozen desserts since their launch in 2007, when it was the first major manufacturer to produce a selection of premium, organic, dairy free ice creams.

Made with just a handful of natural ingredients Booja-Booja ice creams are organic, vegan, dairy free and gluten free.