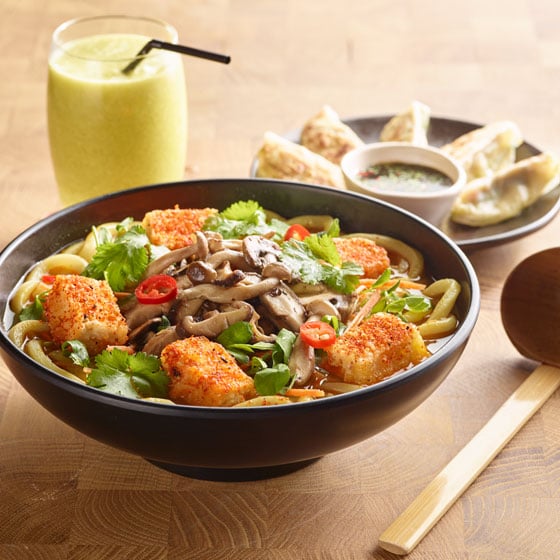 While there are about 1.2 million vegetarians in the UK, a figure which has remained fairly stagnant over the last few years, the numbers following a vegan lifestyle are soaring. There are over half a million vegans, according to the Vegan Society – up 360% over the last ten years – and figures from Ocado show that vegan food sales have risen by 1,500% in the last year.

The vegan drum is being banged in all quarters; as well as celebrity endorsement, vegan diets are being adopted by high-performance athletes (think Carl Lewis, the Williams’ sisters). There’s even a film set in a future vegan utopia: Carnage – Swallowing the Past by comedian Simon Amstell set to debut this spring.

“Veganism is becoming an increasingly popular lifestyle,” says George Gill, CEO of The Vegan Society. “More people are now aware of the animal exploitation involved in the production of meat, dairy and eggs, and do not wish to support these industries.”

He adds: “The image of veganism is undergoing the most radical change in its history, while shedding some tired old stereotypes. People now closely associate veganism with health, fitness and wellbeing, when the opposite was perhaps true a few years ago.”

United we stand?
Vegan as a term can be problematic, as people aren’t necessarily avoiding animal products due to deeply held environmental and ethical beliefs; many are doing so for health reasons. However the ‘tired old stereotypes’ aren’t that easy to shed.

In the recent BBC documentary, Alone With Chrissie Hynde, Pretenders’ front woman told interviewer Sandra Bernhard: “The vegan tyranny winds me up. It’s all become about nutrition. I find that quite offensive. It’s not about compassion anymore.”

This continued politicization of veganism and the hard and fast attitudes as to what constitutes ‘a vegan’ could be a hurdle for continued growth. “It’s a double-edged sword,” says Gill. “As veganism is about fairness, equality and compassion, it naturally attracts those who hold similar values. However, it should be politically neutral and we want to get the message out that veganism is for everyone and holds multiple benefits for individuals and wider society. It is paramount that the vegan community is very open, encouraging and welcoming towards new vegans.”

The UK Vegan Festivals Guide this year features an impressive 80-plus events, one of which is the European VeggieWorld, which is making its UK debut in 2017. Event organizer Jimmy Pierson explains who it’s aimed at: “While veganism is one of the fastest growing lifestyles in Britain, it’s not just vegans who come to events like
VeggieWorld. There are the million vegetarians in the UK, the huge number of people who are lactose intolerant, and the third of the population actively reducing the amount of meat and dairy they consume. There’s a real shift in our nation’s dietary habits happening right now.”

Pierson is director of new international vegan charity ProVeg, which aims to reduce the global consumption of animal products by 50% by 2040, as well as unify the vegan movement. “It’s hugely important that veganism is seen as the easy and accessible lifestyle that it is – for everyone, not just a select few. At ProVeg we’ll be working towards making the vegan movement more inclusive, welcoming, approachable and kind.”

Jay Morjaria, chef and founder of Sutra Kitchen, Central London’s first exclusively meat-free cooking school, believes that sometimes saying less is better when it comes to vegan food. “For many years I didn’t have the best view of the word ‘vegan’; it was always very activist-led. I prefer the term ‘plant-based’. I feel it is a personal choice whether you choose to be vegan or not, there are many reasons why people choose to be, and much of it is around personal circumstances and what they believe.”

Vegan vs plant-based
Alan Martin, director of Food for Thought, sees vegan and plant-based as two distinctive diets, and believes the growth highlighted in the media is driven by the latter. “There is a whole group of people out there who don’t identify as vegan, but rather as having a plant-based diet. They aren’t eating any kind of meat but they’re not going down the political route, and this is where we’re seeing the growth in the stores – we’re seeing a huge increase. These are mainly younger people who are also more interested in organic. Vegan is more political.”

Peter Dewdney, partner at Planet Health & Organics in Thame, also thinks that ethical and health considerations are two separate issues. “If I asked a vegetarian or a vegan why they follow that lifestyle, very rarely would I get someone saying ‘I’m doing it for my health, but also for ethical reasons’. You tend to get one or the other. I think that vegans 20 or 30 years ago were more concerned with ethics, but now, while that group still exists, more are doing it for health. But by making a decision on one of these reasons you are automatically helping out with the other.”

According to a recent Ipsos MORI poll, nearly half of all UK vegans are aged 15-34, and Dewdney has certainly seen a lot more young people being drawn to a vegan lifestyle. “I think with social media and the Internet, people are beginning to fully understand the commercialization of farming, and young people are thinking, ‘hang on a minute, do we need to eat that anymore – is there an alternative?’. We now sell more vegan products to children than we’ve ever sold.”

Dewdney is putting more of an emphasis on vegan in his store as he can serve these customers better than the supermarkets. “It’s all very well for supermarkets to sell vegan foods, but they don’t sell the advice, and people need information. If someone is moving to vegan from a normal diet more often than not there are digestive issues that go alongside, and supermarkets are not in a position to explain this.”

He has seen a substantial growth in non-food vegan products, particularly supplements. “Vegan supplements are really important for us. If you take glucosamine as an example – when we opened we didn’t have a vegan alternative to glucosamine available. We now have two or three, including Higher Nature’s Glucosamine HCI.”

This growth in vegan VMS tallies with a recent Mintel report that says as vegetarian and vegan trends become cemented in the food market, there are opportunities for VMS brands which don’t use animal-based ingredients. ‘Brands can also use marketing to educate vegetarian/vegan consumers about the importance of replacing vitamins they will miss out on by avoiding meat,’ it advises.

Healthy eating?
According to the Visiongain Meat-Substitutes Market Report 2016-2026, the global meat substitutes market will grow to over €3.57 billion this year, ‘driven by health concerns, and the health and wellness trend’. But ‘vegan’ and ‘vegetarian’ don’t always equate to ‘healthy’, as many meat substitutes are highly processed.

“In processed vegan foods you are sometimes sacrificing nutritional value for the exclusion of animal products,” says Dewdney. “You often find they have a higher fat content than a non-vegan product along similar lines because the food has to be presentable, and so fats are used to bind the ingredients together. However, I don’t think many consumers are aware of this. They think if it’s vegan, it’s healthy.”

As far as the future of veganism, Morjaria believes it will head into the mainstream: “I think it will become normal for menus to have a number of vegan/plant-based choices, such as in US restaurants. I don’t think we will think about it or debate it so much in the future. It will be very normal to hear someone is vegan.” 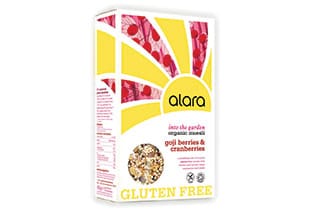 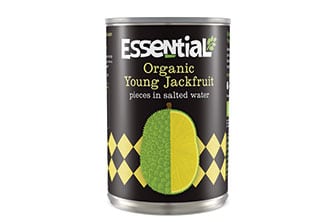 Essential Organic Young Jackfruit is an exciting new vegan meat alternative that’s previously been something of a chef’s secret. The ethically sourced young jackfruit, grown organically by long-term farming partners in Sri Lanka, is a savoury ingredient that foodies love but which is little known in the UK. Chunks of the fresh young jackfruit are canned in salted water, and provide a natural, nutritious and delicious alternative to meat. The texture and appearance, when cooked, are not dissimilar to pulled pork, and shredded jackfruit can be used in cooking in a similar way – delicious in wraps, tacos, burritos and buns, with succulent sauces. 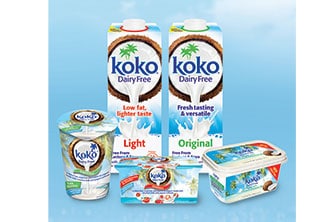 Koko Dairy Free is a delicious range of coconut based dairy alternatives which are dairy, soya and major allergen free. The plain and flavoured milks taste surprisingly like dairy milk and are highly versatile in use.  The range of 5 delectable yogurt alternatives are made with freshly pressed coconut cream for a silky smooth creamy texture, and fermented with live dairy free yogurt cultures for the true taste of yogurt. Koko Dairy Free spread has a buttery flavour which is perfect on bread or in cooking. The whole range is approved by the Vegetarian and Vegan Societies. 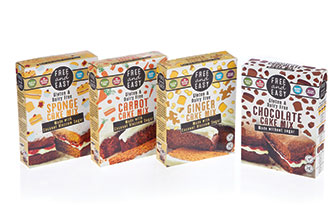 ‘Free from’ and vegan brand, Free and Easy has unveiled a unique range of natural cake mixes designed to suit those with health complaints caused by intolerances and allergies.  The four-strong product range has been created for the health-conscious ‘free from’ consumer without the 14 most common allergens – including wheat, gluten, dairy, nuts and soya – and is suitable for vegetarians and vegans alike.  Formulated without refined sugars, the cake mixes will be available in three variants made with coconut blossom sugar – Sponge Cake, Carrot Cake and Ginger Cake – and one sugar-free variant made with xylitol – Chocolate Cake.   For further information, visit www.healthyfoodbrands.co.uk. 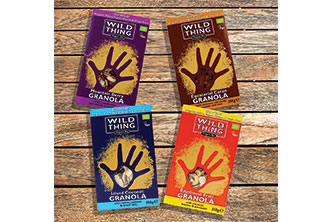 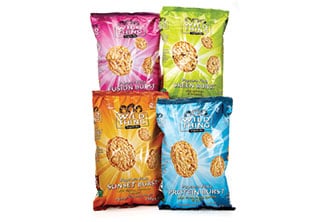 Our unique blend of organic corn kernels and natural ingredients, popped in coconut oil and lovingly squeezed into popcorn flats. We have reinvented the bland rice cake into an innovative new popcorn based flat, bursting with flavours and packed with the benefits of new nutrition, from invigorating broccoli and spinach to powerhouse grains, pulses and seeds. Gluten-Free, Vegan and free from listed allergens, the Popcorn Flat is an inclusive, fuelling snack for all. 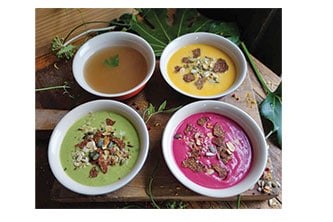 Pep & Lekker soups are packed with plant protein and are a nutritious satisfying meal. Hand-made from organic fresh vegetables and free of additives, gluten or dairy. Our range currently includes Gleaming Gold, Ravishing Red, Gorgeous Green and Beautiful Broth. The soups, as the names suggest, are as pleasing to the eye as the palate and are vibrant coloured from the goodness within. Served as single server with hand-rolled nutty seed bites to give a crunch against the smoothness of the soup. Our soups also support natural detoxification when eaten as part of our 3 or 5 day cleanse programme.