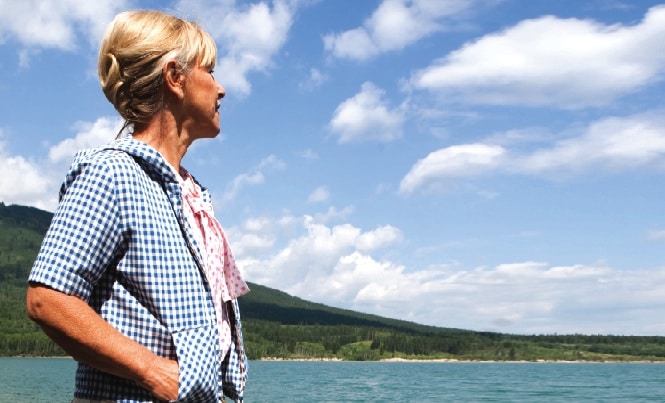 Ahead of her talk at camexpo, Dr Marilyn Glenville talks about her uniquely natural approach to helping women through the menopause.

Menopause is a fact of life. It literally means ‘the end of monthly cycles’ as the fertile period of a woman’s life starts to come to an end.
But despite being a natural stage in a woman’s life, all too often it’s treated like a medical condition with an alarming set of symptoms. Of course, independent health stores know different – and the range of herbal products they stock helps spread awareness of more natural approaches to this key lifestage.
With this in mind, natural health expert Dr Marilyn Glenville explains her take on what happens when fertility comes to a close.

The menopause is in fact the last period. A women is then post-menopausal when she’s one year free of periods.

NP: And how is menopause often treated by doctors?
It’s medicalised, so it’s treated as an unnatural event – but really it’s a natural stage in a woman’s life, just like puberty.

The suggestion is sometimes that somehow nature has got it wrong and that hormones shouldn’t be declining but should be replaced. That’s what women get nervous about, that they won’t be able to cope with the symptoms.

Some women do suffer, but others sail through it. I’ve had patients that come into the clinic and say that their periods stopped six months ago – and they want to know when the symptoms will start.

In the West there’s almost this expectation that the menopause comes with a set of problems. In other cultures, particularly Eastern cultures, they see menopause as a positive stage in a woman’s life. They become wise women and counsel younger couples. These attitudes around it make a difference.
Over here it’s often seen as a loss – loss of cycle, loss of fertility, the ‘empty nest syndrome’. There’s all that negativity and I think that makes it worse.

NP: How widespread is hormone replacement therapy these days?
It’s interesting, because the Committee of Safety in Medicine says HRT should only be used in the short term, up to a maximum of five years.
In terms of our patients I think that its use has actually increased because women think ‘well I only have to take it for five years and then I can come off it anyway and then deal with the symptoms then’.

In America, since 2003 they’ve not been able to call it hormone replacement therapy, they’ve had to call it hormone therapy to acknowledge they’re not replacing hormones that aren’t there – that’s not what happens. That’s been a big attitude shift.

That’s where the risk from breast cancer comes from – the fact that we’re putting something back that shouldn’t be there.

NP: So where do you stand on HRT?
Some women think it’s absolutely wonderful and don’t want to come off it. Others feel a bit ‘out of it’ and disassociated from their bodies. Every woman is different and it’s about weighing up the risks and the benefits for that individual woman.

Obviously for me, because I believe menopause is a natural stage in a women’s life, I think it’s about aiming to do it naturally – then using HRT if necessary as a last resort.

NP: What is the key to a healthy natural approach to the menopause?
It’s about lifestyle factors like exercise and healthy eating alongside herbs and supplements. The key factors will be different for different women.
It’s trying to get the approaches together and giving them a lifestyle shift around that time in their lives to help them through the transition easily.

NP: So where does food come in?
At the clinic we’d advise upping phyto-nutrients from flaxseeds, soya, lentils and chickpeas. They help to balance hormones, so we’re trying to make this transition from one stage to another as those hormones decrease.

You can sprinkle flaxseeds on porridge, you can eat tofu  – along with oily fish, fruit and vegetables and wholegrains. Going organic is great too. Sometimes it’s an effort for women to make the dietary changes, but the benefits are enormous.

NP: Which supplements are useful?
On a standard level it’s a multivitamin and mineral that’s designed for the menopause. So it’s got good levels of calcium, magnesium and boron, vitamin D3 as well as antioxidants.
I’d add in extra vitamin C because it’s important and there’s not enough in a multi. Plus omega 3 because it’s important for the skin, vaginal health, joints – where the body needs lubrication and may be drier because of the menopause.

I’ve actually formulated some for natural health practices called NHP supplements. The one we use in the clinic is called Meno Support. The health shops do stock them and they came directly out of the clinic experience and research.

NP: Are there are new supplemental approaches which are useful?
If we go for the tried and tested we have an evidence base behind it. I still think black cohosh is the herb of choice for menopause because there’s such good research on it.
I know there will be new trends in supplements that come up – but if we look at things that are long-lasting, without getting swayed off at a tangent, they work really well. There are a lot of choices for women, and it’s about getting it right for them.

It’s about looking to the future as well as dealing with any symptoms she might have now.

Riding the wave of hydration