On Wednesday, the Soil Association’s Out to Lunch 2017 campaign published its latest league table, ranking the children’s food offerings of 25 of the UK’s most popular restaurant chains.

Coinciding with World Obesity Day, the results showed that although several chains have substantially improved their children’s menus, many are still failing to serve fresh food or healthy choices.

Working in collaboration with Hugh Fearnley-Whittingstall (pictured) and an army of secret diners, the Soil Association uncovered a number of worrying practices, including serving oversized children’s puddings (one at Hungry Horse contained 400% of a child’s daily sugar allowance) and meals containing an additive linked to hyperactivity (E133 Brilliant Blue FCF).

And the cost of a meal was found not to reflect quality, with the average meal price at the top five chains being cheaper than at the bottom five.

The Soil Association also says that chains could give more support to farmers by buying British, with the campaign finding one side salad that contained ingredients from 32 different countries.

The results of the Out to Lunch campaign saw Jamie’s Italian topping the league table, while at the opposite end of the scale was Burger King. Strada saw the biggest improvement, moving 16 places to come third. Since 2015 the chain has introduced a salad with every main meal, a fresh fruit pudding, and the option of choosing smaller portions of adult meals. It also offers organic juice, higher welfare RSPCA chicken and sustainable fish.

“Given that we’re in the midst of an obesity crisis, and that we’re eating out more than ever before, restaurant chains have to step up and take some responsibility for the health and well being of their customers.”

Despite a number of negative findings, the Soil Association says that Out to Lunch has improved over 70 million meals served to children this year, with 13 chains now serving a portion of vegetables or salad with every meal (up from six chains in 2013) and 12 chains that include organic ingredients on the menu (up from four in 2013). 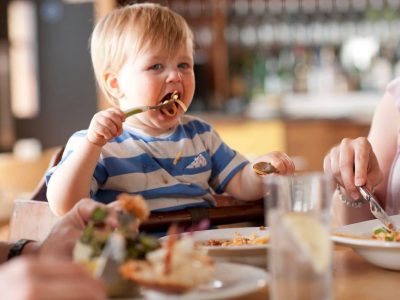 “Thanks to our secret diner families, Out to Lunch is transforming children’s food on the high street – many restaurants are now prioritising child health and investing in healthier and more creative meal option,” says the Soil Association’s Rob Percival (pictured with Hugh Fearnley-Whittingstall). “But there is still a national scandal unfolding in plain sight: 75% of UK parents say they are worried by the portion size of children’s puddings when they eat out. We found that renegade chains are ignoring parent concerns by dishing up super-sized calorific junk, undermining national efforts to tackle childhood obesity.”

Hugh Fearnley-Whittingstall added: “Given that we’re in the midst of an obesity crisis, and that we’re eating out more than ever before, restaurant chains have to step up and take some responsibility for the health and well being of their customers. It’s time to be clear with parents about what’s going into their children’s food, to stop pushing endless sugar, and lazy combinations of refined carbs, and start promoting healthy veg!”