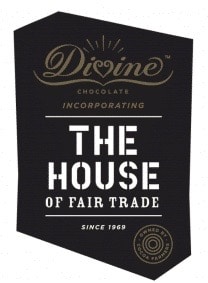 In August 2018 Divine Chocolate purchased the assets of The House of Fair Trade. The company, based in Gothenburg, has distributed Divine Chocolate in Sweden for the last 15 years.  Telling the inspirational story of Divine, and the co-operative of cocoa farmers in Ghana who own the biggest share of the business, they have grown Divine’s sales across Sweden and helped to establish the Divine brand in the Scandinavian market.

Sophi Tranchell, Group CEO of Divine Chocolate says: “Working with The House of Fair Trade, we look forward to building Divine’s presence in Sweden and the rest of Scandinavia where Fairtrade continues to grow in popularity.”

The House of Fair Trade is a member and one of the founders of the World Fair Trade Organisation (WFTO) and the new acquisition coincides with a new Fair Trade Charter, developed by the WFTO in partnership with Fairtrade International, which will be launched this month, detailing the positive impact of Fair Trade on producers and craft artisans around the world to date, updating their policies, and detailing their joint ambitions and targets for the future.

Tranchell adds: “We are pleased to be supporting both Fairtrade producers, and WFTO artisan members, at a time when these two major international organisations are reaffirming and updating their commitments to fairer trade for the future and closely aligning their ambitions to meeting the UN’s Sustainable Development Goals.”

The company that became The House of Fair Trade was first established in 1969 to sell a range of Fair Trade handicrafts supporting artisan producers in a number of different countries worldwide. Divine says that it is committed to continuing the company’s mission, selling products from artisan suppliers which are all members of the WFTO, which ensures a sustainable income as well as labour and environmental standards, as do Divine Chocolate products, which all are Fairtrade certified.

In Sweden the company ownership will now be Divine Chocolate Scandinavia AB.